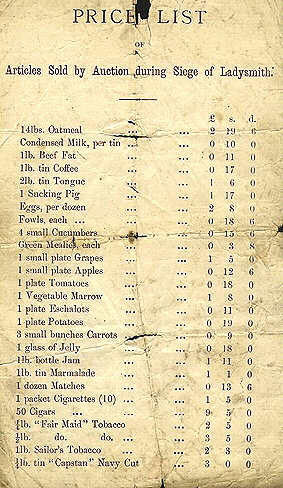 Steve Watt: ‘In Memoriam’ (University of Natal Press Pietermaritzburg 2000 ISBN: 9-780869-809686) provides a Roll of Honour of Imperial Forces in the Anglo-Boer War 1899-1902, 25 000 soldiers, women and civilians in military employ all of whom laid down their lives for the British cause, whether they were from Britain itself, South Africa, Rhodesia, Australia, Canada, or New Zealand. Lists alphabetically the individual's name, regimental number, regiment, type of casualty, place, date of death, where buried, and whether the name is listed on a monument or in a graveyard, with location. Where available, particulars of age and religion of the deceased are given.

Darrell Hall: ‘The Hall Handbook of the Anglo-Boer War’(University of Natal Press 1999 ISBN 0-86980-949-0) gives a useful list of British Regiments and the dates of their period of service in South Africa, with the battles or operations at which they were present. This helps to sketch an outline of the ancestor's activities and time spent in this country. Hall also gives a list of the Colonial Forces with SA arrival and departure dates, and a list of SA units with details such as when and where these were raised and disbanded. Men who were awarded the Victoria Cross during the Anglo-Boer War are listed alphabetically, as are names of graveyards where Imperial Soldiers were buried. There are brief biographies of some of the major personalities associated with the war.

John Stirling: ‘The Colonials in South Africa 1899-1902’ (Blackwood, Edinburgh 1907) A mine of information; some individual names, such as those mentioned in dispatches, are included as well as details of each unit’s operations during the war.

‘Diary of the Siege of Ladysmith’ (Ladysmith Historical Society, several volumes) gives first-hand accounts by such people as Major G F Tatham of the Natal Carbineers, Bella Craw, niece of Major Tatham and resident in Ladysmith during the Siege, letters of Lt Col C W Park of the Devonshires, notes on the campaign written by A J Crosby of the Natal Carbineers and the experiences of a Siege Nurse, Kate Driver.