Caithness and the schooner Prairie in Tasmania 1856


References to local Cape mariners like James Ramsay Caithness can frequently be picked up in newspapers from much further afield. In this instance, the topic is Caithness's schooner (or brigantine), the Prairie, stranded near Rocky Cape, Tasmania. 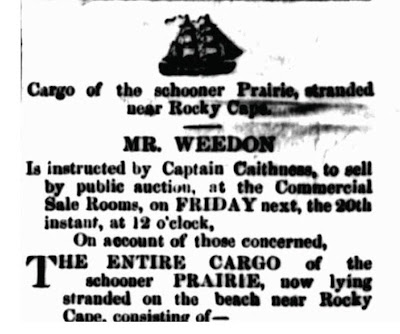 The American built 150 ton schooner had been bound from Cape Town to Melbourne,
laden with wine, oats and raisins. She went on shore on the coast between Rocky Cape and Emu Bay. The schooner lost her foremast off Cape Otway and went on shore at high water. The master of the wrecked vessel was at Circular Head. The vessel is said to be but little injured and might be got off after discharging the cargo.  The crew were encamped on the coast.


More on the Caithness family and this incident at: