The Natal Mercury Pictorial of 1915 gives the following intriguing version as to khaki's origins: 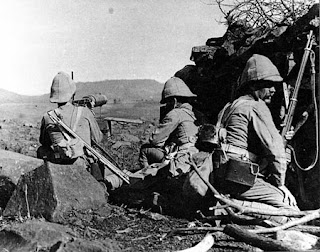 ‘Khaki was discovered by a happy accident. British troops in wore a cotton uniform which when it was new was khaki in colour, but after a visit to the laundry was indescribable. A businessman, discussing this defect, casually remarked that a fortune awaited the man who could find a khaki dye that neither sun, soap, nor soda would fade. A young officer heard the remark, hired a skilled native dyer, and began the search. Years passed in fruitless experiment, till one day turning over a heap of rags, relics of their failures, they chanced upon one piece which was still khaki, though the laundry had worked its will. But it had received no special treatment, so far as they knew, except that it had fallen into a metal dish. That was the secret. The metal of the dish and the chemicals in the dye had combined to produce that fadeless khaki colour which makes our soldiers invisible and turned the lieutenant into a millionaire.’

Whatever the truth, khaki became standard overseas service issue in 1896 and its use spread into civilian life as well, men’s khaki jackets and trousers being advertised in South African newspapers from about 1899. Because of the universality of the khaki uniform, it’s not easy to identify photographs as being specifically of the Anglo-Boer War period, or even to know whether the pictures were taken in at all, rather than in other parts of the Empire – , perhaps, or the . Many photographs of this era were ‘mock-ups’ taken a long way from the veld.

Basically the uniform consisted of tunic and trousers, worn with puttees (a strip of cloth wound round the leg from ankle to knee), and a khaki-covered helmet as protection against the sun. There were some changes – the original uniform fabric, a firm coarse cotton known as drill, was replaced by serge, and the style of the helmet underwent some modification. Sometimes a flap of material attached to the back of the helmet shaded the neck – or the helmet was simply reversed so that the longer part of the brim served that purpose. There was a regulation pith hat as well. The felt slouch or ‘smasher’ hat with the brim turned up on one side, as worn by colonial volunteers, was found to be more practical than the helmet, and this headgear also became popular among Imperial troops, so if the man in your photograph is wearing the slouch hat it may not necessarily mean that he was in a colonial unit.

There were minor variations in dress according to regiment. The Canadians had their own distinctive hat with a high crown. Imperial cavalry regiments wore chains on the shoulders of their tunics, boots rather than puttees, and leather gauntlets. Certain regiments affected coloured puggarees wound round the helmet. It’s not difficult to pick out a member of a Scottish regiment in kilt and sporran (which must have been hot in the tropics, and sometimes a khaki apron was added to this ensemble). Some of these differences may aid in identification of an ancestor’s photograph, but in the field there were often highly-individualistic alterations to the regulation uniform.