The soldier's accoutrements can provide clues as to date, regiment and rank. For example, in the Border Mounted Rifles, a permanent volunteer corps, up to 1896 ammunition was carried in a pouch with a brown leather crossbelt. Later, what was derogatively known as the ‘Royston Entanglement’ was adopted - a combined rifle sling and bandolier used by NCO's and troopers. Officers and Warrant Officers of the unit wore the Sam-Browne sword belt. Incidentally, the Alexandra Mounted Rifles, which evolved to become the Border Mounted Rifles in 1894, adopted the use of khaki for its field service uniform in 1874.  This is the earliest recorded military use of khaki in South Africa, a possible exception being the 2nd Highland Light Infantry (74th Highlanders) who, in the 8th Frontier War 1850-1852, fought in doublets of that colour.

As family historians know to their cost, names, dates and places are notoriously absent from the back of photographs. In Anglo-Boer War groups badges and insignia may not be visible or easily identifiable; it could be worth asking for specialist advice. If you’re fortunate enough to own a medal awarded to the ancestor, engraved on the rim will be his name, rank and unit, which is an excellent start.

Most men serving in the Anglo-Boer War were eligible for one or both of the two campaign medals – the Queen’s and the King’s . This topic, including the use of the medal rolls for tracing Anglo-Boer War ancestry, was covered in detail in David Barnes’s article “The British Army in the Anglo-Boer War”, in the 6th edition of The Family and Local History Handbook. Several published medal rolls are available: D R Forsyth's ‘Defenders of Kimberley Medal Roll’, and S M Kaplan's ‘Medal Roll of the Queen's South Africa Medal with Wepener Bar’, and ‘Medal Roll of the Queen's South Africa Medal with Bar Relief of Mafeking’.

Some of the most interesting departures from standard uniform were seen among the colonial volunteer regiments. It was not unknown for certain of these to take to the field in their shirtsleeves, which deplorable habit occasioned much comment from more conventional echelons. However, the colonials were valuable and courageous troops, well-suited by experience to the conditions which they faced in . This is particularly true of the colonial mounted regiments – they formed two-fifths of the entire mounted force participating in the war.

Should an ancestor have been among the colonials, there are numerous possibilities as to the regiment in which he may have served.  On the outbreak of the war, thousands of troops from the overseas colonies were sent to from , , , and . In itself, there were permanent regular forces including the Natal Police, Cape Mounted Police and Cape Mounted Rifles. These should not be confused with the permanent volunteer units which had been in place for some years, such as the Natal Carbineers, Durban Light Infantry, Diamond Fields Artillery and Diamond Fields Horse, Border Mounted Rifles, Kaffrarian Rifles, Cape Town Highlanders, the Kimberley Regiment and others.

They were the stuff of legend and a typical tale is that of Major C B Childe who led 300 South African Light Horse (like the ILH largely composed of Uitlanders) at the taking of Bastion Hill from the Boers in January 1900. Major Childe is said to have had a premonition on the day before the battle that he would be killed, and asked fellow officers to ensure that a biblical quotation would be engraved on his tombstone. Taken from the second book of Kings 4.26, it read: ‘Is it well with the child? and she answered, it is well’. As he’d foreseen, Childe fell at Bastion Hill and his request was duly honoured. 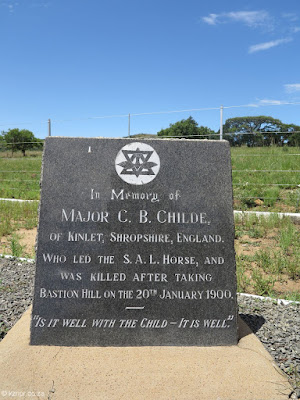