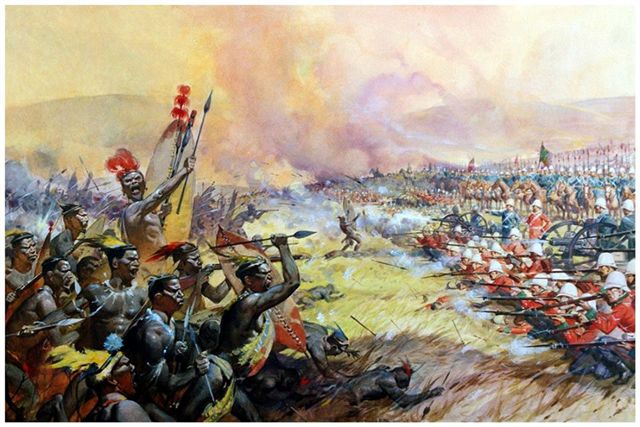 ULUNDI: A Study in Revenge?

The Battle of Ulundi took place at the Zulu capital of Ulundi on 4 July 1879 and was the last major battle of the Anglo-Zulu War. The British army broke the military power of the Zulu nation by defeating the main Zulu army and immediately afterwards capturing and razing the capital of Zululand, the royal kraal of Ulundi.


'After half an hour of concentrated fire from the artillery, the Gatling Guns and thousands of British rifles, Zulu military power was broken. British casualties were ten killed and eighty-seven wounded, while nearly five hundred Zulu dead were counted around the square; another 1,000 or more were wounded. Chelmsford ordered the Royal Kraal of Ulundi to be burnt – the capital of Zululand burned for days. Chelmsford turned over command to Wolseley on 15 July at the fort at St. Paul's, leaving for home on the 17th. Chelmsford had partially salvaged his reputation and received a Knight Grand Cross of Bath, largely because of Ulundi; however, he was severely criticized by the Horse Guards investigation and he would never serve in the field again.

Cetshwayo had been sheltered in a village since 3 July and fled upon hearing news of the defeat at Ulundi. The British forces were dispersed around Zululand in the hunt for Cetshwayo, burning numerous kraals in a vain attempt to get his Zulu subjects to give him up and fighting the final small battle to defeat the remaining hostile battalions. He was finally captured on 28 August by soldiers under Wolseley's command at a kraal in the middle of the Ngome forest. He was exiled to London, where he would be held prisoner for three years. Wolseley swiftly divided up Zululand into thirteen districts, installing compliant chiefs in each so that the kingdom could no longer unite under one ruler. Cetshwayo was restored to the throne of the partitioned Zulu kingdom in January 1883 shortly before his death in 1884.'

And so the die was cast. Andrew

Warfare is a fascinating subject. Despite the dubious morality of using violence to achieve personal or political aims. It remains that conflict has been used to do just that throughout recorded history.

Your article is very well done, a good read.