The Last of the South African Lighthouse Keepers: Hannabus family

A series by Suzanne-Jo Leff Patterson - 2015

As we continue this series, recognition is paid to the Hannabus family.  Their history of three generations in the lighthouse service, illustrated below, is a continuous contribution to providing safety to the numerous ships and their precious cargoes of passengers and crews which plied the long and rugged South African coastline. 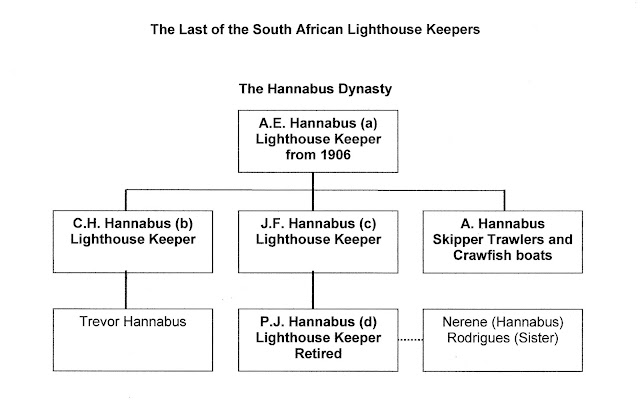 At various periods of their careers, all of the Hannabus dynasty were Senior Keepers of the Light:

Our earlier story began with , which was one of the most remote Lighthouses along the coast and it has a history of unusual mysteries.

From Colin Urquhart’s book, ‘East to the Isles’, P-J Hannabus brings us this captivating story, which involved his uncle, Lighthouse Keeper, Charlie Hannabus.

The story begins, when, Lighthouse Keeper, C.C. Hansen was stationed on in 1908. The isolation depressed his wife Mrs Hansen in the extreme and one day she was found drowned in well near the Lighthouse.  As time went by, rumours circulated and questions were raised as to whether it was suicide or something more sinister and Keepers and Guano staff believed that Mrs Hansen’s spirit haunted the island!

When he was stationed there, Charlie Hannabus claimed the double-storey house on the island, just NW of the tower, was haunted!

On certain nights it was said that "Mrs. Hansen" would run through the house as well as walk the island.  Charlie claimed that whilst he was there in 1930, sleeping in the kitchen one night for warmth, he suddenly woke up to find himself being dragged by his ankles across the floor by, he was sure, "Mrs. Hansen!”  The next night nothing would induce Charlie to sleep in the kitchen again and he slept upstairs with the door firmly bolted!

Shortly after this episode on one moonlit night, Head Lighthouse Keeper, Fred Ball, with thirteen years spent on the island and his Assistant Edwards, clearly saw Hannabus stumble 200m, across the island from the house to the flag room - but when they checked on him, Charlie Hannabus was in his bed!  Was that a ghost the two keepers had seen?  What explanation could there be?

Keeper Fred Ball said that Hannabus then recounted a similar incident some years earlier, when, on a stormy night, thought he had seen the Guano Headman strolling outside, but when the Keepers checked, the Headman was in bed ….. fast asleep!

Once again, on a stormy night, some twenty five years later on, while Tommy was on duty, Mrs Addison, wife of Head Keeper Tommy Addison, heard footsteps come up those stairs!  Terrified, Mrs Addison ducked under the blankets and heard the ‘ghost’ next to her bed, even to the extent of hearing the tick, tick, tick of a watch!  Later, when she questioned Tommy, he assured her that he had been on duty in the tower all night and did not come home at all!

The belief still exists today, that remains haunted.  After the house was torn down, burnt and replaced in 1979, it seems that ‘Mrs Hansen’ was never seen again.  Even then, lighthouse maintenance crews did not like staying over, claiming that blankets have been pulled off beds as the crew slept and cold draughts blew through the rooms even when windows were tightly shut ……….

I’m sure that many readers will be sceptical, but the question has to be posed – If you are a sceptic, would you be comfortable spending the night in the house on the island on a stormy night?

There are some indiscrepencies here involving C H Hannabus. He was never on the island in 1908 but did a year in 1953 when the new keepers house was built. The picture at Danger point, the middle man is not A.Slattery, it must be some one else.A E Hannabus was known as Albert and not Bill. The house was haunted as experienced by myself and by the black fellow living in it in 1953. The murder of some ones wife and the body placed in the water tank is true but the husband left the Island but police caught up with him.

Thanks for your comment re discrepancies - they will be checked by the author.

Are you not in a position to drive your car? Hiring a safe driver Dubai is the best thing to do if you are in Dubai and Awesome Drive is the best safe Driver Company. Awesome Drive welcomes you to a chauffeur-driven service. It is a driver company operating in Dubai.