According to the listing of the Port Office in the Natal Almanac, when my light-keeper great grandfather, Thomas Gadsden, was Head Keeper of the Bluff Light, Durban, he was paid a hundred pounds a year, 'with quarters'. This wasn't an enormous salary but he was doing better than the 'Native Assistant' at twelve pounds. And in comparison with the Port Captain, then Alexander Airth, who received 350 pounds, perhaps Gadsden's salary was fair.

At this date, the Assistant Light-keeper was D W Bell, Gadsden's brother-in-law, the son of the late Captain William Bell who had died in 1869. Gadsden had married Bell's daughter, Eliza Ann, in 1873.

So the lighthouse was very much a family affair. Douglas Bell took over as Head keeper in about 1880. 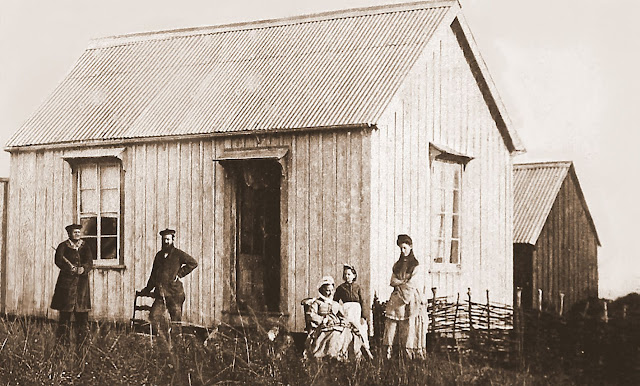 This unique photograph, restored from its original damaged condition, shows various members of the Bell family including possibly the only surviving picture of Douglas Bell, left. He could be holding the Dolland telescope which previously belonged to his father, Capt Bell. Unfortunately, it was this portion of the original photo which was water-damaged and the figure may not be an accurate likeness of Douglas Bell - though the telescope was definitely visible in the original.

The ladies are 'Aunt Ellen' (Ellen Harriet Bell, daughter of Captain Bell, who later married Edward Baxter) and her niece 'Cousin Violet Bell' (Violet Amy, daughter of Sarah Scott Bell and Charles George Pay).  The other little girl may be Natalia Beatrice Pay, sister of Violet. The identity of the bearded man, perhaps Assistant Light-keeper at the time, is not known.

The photograph was taken by W E James who at that date, ca 1880, had a studio at the Point, Durban.

Most interesting of all is the structure in front of which the group is foregathered. This is likely to be the current keeper's quarters near the Bluff Lighthouse. It has a corrugated iron roof over timber walls which are raised above the ground (against white ants). The windows with their top 'awning' detail are typical of the period. Note the plaited fence.

For more about the Gadsden/Bell connection with the Bluff Light see:
molegenealogy.blogspot.com/2014/08/keeper-of-bluff-light-thomas-alfred.html