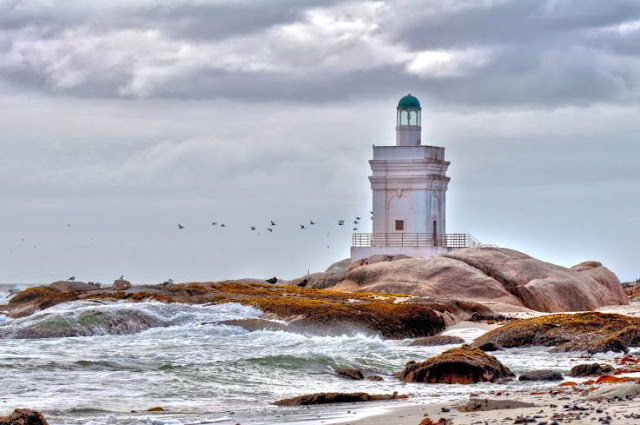 This unusual and classically-attractive lighthouse (strictly speaking not a lighthouse but a lead light), also called Stompneus Point light, was built privately by the owner of the estate (he was a lighthouse enthusiast) and later became official. Located at the northernmost point of the Cape St. Martins peninsula, marking the western entrance to St. Helena Bay, about 20 km northeast of Paternoster. Today the site is open but the tower closed.

Harold Williams does not include this light in his volume Lighthouses of Southern Africa, hence he offers no lists of lightkeepers at Shelley Point. If anyone has further information on the topic please contact Mole via this blog.

Input from P J Hannabus: it seems that the old beacon was a local structure to assist the trawlers. From that point, eastwards along that small piece of coast, is a residential area called The Golden Mile. Rows of palm trees line the access roads and properties. As the name suggests, it is a Millionaires Row with mansions resembling Beverley Hills in the USA.
These folks were unhappy with the  common wooden structure on their doorstep, and had the present structure built to resemble a Middle East minaret.

[Mole is of the opinion that the dome looks more Italian than Middle Eastern.]
Posted by Mole at 8:01 AM