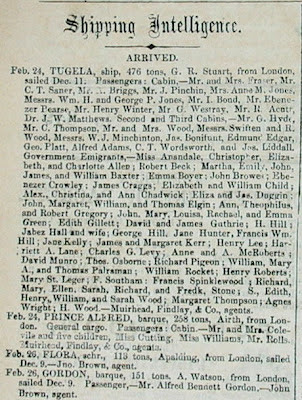 A typical shipping column from the Natal Mercury showing the arrival at Port Natal of the ship Tugela, 24 February 1865 (sailed from London 11 December 1864). In this instance the names of the 'Government Emigrants' are included i.e. the steerage passengers.

There are some errors in the spelling of surnames: e.g. Palraman should be Palframan.

The Natal Mercury also offers a report of the voyage and subsequent landing of these settlers, a story which could be applied to many similar experiences at this port:

'The Tugela ... arrived early on Saturday morning, after a voyage from England very much protracted by foul winds in the channel, and off this coast. She was within 250 miles of Natal twelve days before her arrival, but had to share the fate of many vessels that have been waiting for a change of wind. She brings an addition to our population of more than a hundred souls. The passengers' names appear in our shipping intelligence. Eighty of them came out under Government auspices. The whole were landed on Saturday afternoon and they seem a happy and very respectable party of settlers. There was a lamentable scene of uncertainty, bordering on confusion, at the Point, when our new friends came ashore, owing to the utter inefficiency of the present no-system policy pursued by the Government. No one to receive them, no one to direct their movements, to tell that what to do or where to go, no aid, sympathy, nor help of any sort whatever. Lamentable, most lamentable, is this total want of anything like arrangement for the proper reception of European immigrants. The scene on the quay was amusing as usual ... The voyage out, barring the  unavoidable delays that have been experienced, has been pleasant. A newspaper - the Tugela Gazette - was got up on board, and it is to be perpetuated in a printed form. The greater proportion of the passengers seem bound for Maritzburg and the midlands ... A warm welcome to them all. The Tugela was towed inside on Sunday afternoon.'

There follows a copy of the 'testimonial' addressed to the Tugela's Captain, George Stuart, from the passengers thanking him for the excellent way in which he carried out his duties on the voyage and expressing their hope that 'should we again have to commit ourselves to the perils of the deep, we may have the good fortune to meet with so good a ship and so excellent a commander'. Another note of thanks is addressed to the ship's surgeon. These complimentary letters were a feature at that time. Later, with ever-increasing numbers of sailings, the personal touch was lost - as well as a useful source of information for descendants.

Thanks for posting this very interesting article. Alexander Chadwick was my great gr. uncle, he came over with his wife Christina and daughters Christina and Ann. I see the younger Christina is missing from the list, an oversight no doubt. They were indeed bound for PMburg where Alexander set up as a jeweller.

Well spotted! I'm so pleased you found mention of your Chadwicks. If the young Christina was definitely born before the voyage - as you imply - it may be that the shipping reporter or sub-editor thought two Christinas in one family must be an error. Or perhaps the list from which the news report was taken was inaccurate. The usual pitfalls of passenger lists, unfortunately. Mole