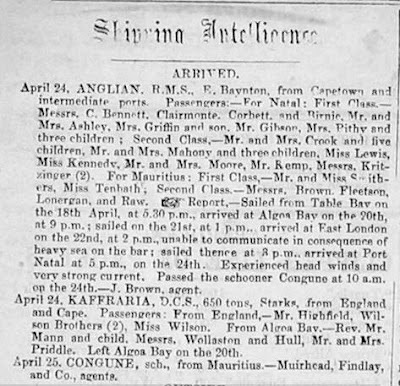 Newspaper shipping columns can be unusually informative: this one, from the Natal Mercury of 25 April 1865, shows the arrival of R.M.S. Anglian at Natal. Names of First and Second Class passengers (regrettably omitting most initials) are given, including those who were continuing onward to Mauritius.

There's also a brief account of the voyage from Table Bay, arrival and departure times at the intermediate ports and comments on wind and weather. Interesting details to add to a family narrative.

The Anglian mentioned in this report was a coaster which had been built especially for the conveyance of mails between Natal and the Cape, a contract awarded to the Union Line in 1865. She was of a light draught so that whatever the tide she could cross the bar at the entrance channel to Durban's harbour. Also employed on the Mauritius run, she left the Union fleet in 1869 when she was bought by a Dublin company and her name changed to City of Lisbon. She sank in November 1903 after a collision during a voyage from Malaga to Liverpool; salvage being impossible, the remains of the wreck were blown up.

This Anglian is not to be confused with the later ship of the same name built in 1873, which made her maiden voyage with Barney Barnato on board, then an obscure passenger but later to emerge as one of the most successful of those who made their fortunes in the South African diamond fields.
Posted by Mole at 10:38 AM