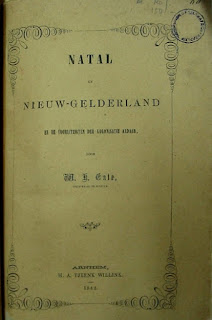 In 1870, the New Gelderland sugar estate, including the mill, was bought by the Glasgow and Natal Sugar Co., but by 1880 the estate was insolvent. The New Gelderland mill was 'out of use' in 1881 though David Brown reportedly had it running again for at least one season.

By 1882 the proprietors of the estate were George Stewart, mill engineer, and William Mathews Ash. Ash had married TC Colenbrander's daughter, Nancy (Antonia Nancy). When Ash died in December 1887, Stewart bought his share in the mill, which continued to operate as the New Gelderland Sugar Factory, remaining in the Stewart family until the 1940s. The mill was dismantled and partially re-erected on the Chirundu Sugar Estate on the Zambesi, Rhodesia. The New Gelderland Estate eventually became part of Natal Estates Ltd.

Some of the Dutch settlers turned to other crops and occupations. In 1872 Messrs J and A Colenbrander were cultivating coffee on their plantation, Hummelo, on the Nonoti (this property, named after Hummelo in Gelderland, Netherlands, is marked on a Natal map of 1904). The Natal Almanac of 1894 lists three members of the Gielink family: Albert, farming at Dalton, Noodsberg, another Albert, mason and farmer at Honey Grove, Noodsberg, and John W., mechanic, at Bozamo (near Stanger), New Gelderland.


Many of the names on the passenger lists mentioned in foregoing posts on this blog appear on gravestones in New Gelderland cemetery. Among them are Colenbrander, Gielink, Freriksen, Ledeboer, Hoetink, Theunissen, Albers, Hoogvorst, Wassink, Weber and Reuterink.

On 14 December 1872 the Natal Mercury reported: 'An accident, proving fatal, to a boy of four years old, took place on Hummelo coffee plantation of Messrs J and A Colenbrander, in the River Nonoti, by the upsetting of a cart while crossing the full river. The body of the poor child (named Andries Gielink) has not been recovered.' Presumably the remains were never found: there is no memorial to little Andries at New Gelderland cemetery.


Not all the graves in the New Gelderland cemetery are those of Dutch settlers or their descendants: other names include David Brown, associated with the New Gelderland mill in 1881, George Stewart and several of his relatives, also some members of the Lyle family such as William Bray Lyle and Leonard Vacy Lyle.


New Gelderland frequently occurs as New Guelderland: since 'Gelderland' was used by the Dutch settlers, I have chosen that spelling.

Passenger lists - always to be approached with caution - offer a variety of spellings of the Dutch settlers' names. The number of passengers reported to be on board may not tally with the numbers given on the vessel's passenger list. Dates of departure and arrival are equally suspect: in the case of the Natal Mercury shipping columns, an arrival date may indicate the day on which the ship anchored outside in the roadstead, rather than the day of the actual landing of the passengers.

Very Interested to read about this, my Grandmother was Matilda Doris Gielink Dob 01/01/1897 who was born at Doesburg farm, she was the 1st Telephone exchange operator in Stanger. Mother was Emma Jane Thring and Father Cornelius Englebert Gielink, busy with my own family tree at the moment. Regards, Shane Bignoux.

Shane, no doubt you've entered Gielink in the search facility at top of page - various relevant posts. The Gielinks arrived on the Jan van Brakel see http://molegenealogy.blogspot.com/2012/06/dutch-immigrants-on-jan-van-brakel.html Several Gielinks were in the Stanger Mtd Rifles. Thring is another well-known Natal name, of course. Interesting to hear from a descendant of the New Gelderland immigrants, thanks for yr comment. Mole

Yes thanks I have. Have read all your posts so far, some interesting stuff! I am doing a Family Tree for my own interest but also for my 10 year old Daughter, as we now live in Aus hopefully it will one day give her a sense of place in this world. Regards, Shane.

My Great Grandfather Pierre Bignoux was the 1st engineer at Gledhow Sugar Mill. In my Profile Pic you can see from the left M D Bignoux (Gielink), Myself Marion Bignoux (Davies)and Darrell Bignoux my Mom and Dad. Dad is still alive living in Mapumulo, my Mom sadly was Murdered in 1999 at our trading store in Mapumulo. Pic was taken in early 88.

I am working on the Vacy Lyle Ash tree, I remember seeing a photo of the Tree Inn in Stratton, Cornwall and I'm pretty sure it was on one of your sites. The sons of William Bray Lyle and Mary Ann Vacy were born there and after Williams death she married Robert Knott Ash and in turn had their children there. At the time I saw the photo I didn't realize it's place in the story. I would be grateful if you could help. I even emailed he current owners but had no replay and I couldn't get a good copy from there website.Thank you for your great sites!

I'm sorry to say I have no Vacy Lyle tree of any description. I only wish I did. Where you saw a copy of one I can't imagine. The few pieces of information I have about that family all relate to their time in Natal and I regret know nothing of the Knott Ash generations. Best Wishes Mole.

Just seen the query from Mary Hall in 2015. My wife is a Lyle and direct descendant of William Bray Lyle. We visited Stratton and the various Lyle cemeteries in Devon & Cornwall last year, 2018. If you wish to contact us we are in the MyHeritage genealogical website. We also have a copy of the Tree Inn photo The Tree Inn is still there and has a new obliging proprietor
Pat Stidolph