This photograph of the Point, Durban can be dated to the 1860s because the steam paddle tug Pioneer is included at left - with her distinctive funnel and flag flying astern. (Click on the pic for a zoomed view.) If you look closely you can see the shaped housing for the paddle wheel.

The other shipping consists of sailing vessels, though a regular mail service by the steamer Sir Robert Peel had commenced in 1852 between Durban and Cape Town. Among the structures clustered on the shifting dunes the Point (the spit of land at right, projecting into the bay) are the Customs House and warehouses. There were no wharves or jetties. In the distance are the hills of the Berea - not a building in sight at that date. The entrance channel is in the foreground.

In June 1860 the town celebrated the opening of the Point-Durban railway line and in September of that year  townsfolk had an opportunity to see Royalty in the person of Queen Victoria's son, Prince Alfred, aged sixteen, who took a ride on the train during his visit to the Colony. 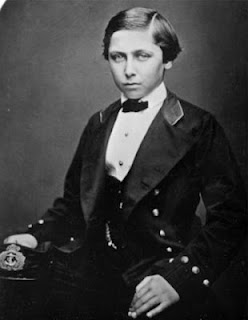 Prince Alfred wearing the uniform of a midshipman in H.M. Royal Navy. He arrived at the Cape in July aboard the frigate, H.M.S. Euryalus, then went on an overland journey to the interior with Sir George Grey, Governor of the Cape Colony, before arriving in Durban on 5 September, 1860..
Posted by Mole at 2:42 PM