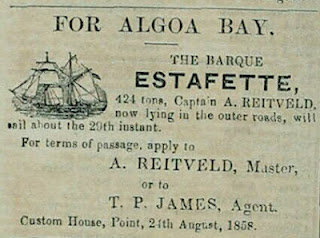 The Dutch barque Estafette, 424 tons, commanded by Captain Reitveld, lay at Oosterdok (Eastern Dock) Amsterdam from 26 March-19 April 1858, where she took on board crew, passengers and cargo. From 20-22 April she was lying at het Nieuwediep (New Deep) off Den Helder at the tip of north Holland. She sailed for South Africa on 22 April and was at anchor at Simon's Bay between 9 July and 1 August, when she departed for the Cape of Good Hope.

On 20 August 1858 the vessel reached Port Natal.1 The landing of her passengers was announced in the Natal Mercury 26 August 1858.