Shortly before the Remembrance Day commemoration in November last year (2017) the bronze plaques on the Cenotaph in Farewell Square, Durban, were stolen and vandalised. There has been no sign of any restoration of this important War Memorial since that date.

Some of the stolen plaques were found at a scrap metal dealer's premises and eight arrests were made. However, as some of the plaques were cut up and otherwise damaged it is by no means certain that these could be repaired or if entirely new plaques should replace the originals.

It is regrettable that respect for such memorials to those who fought and gave their lives is not a feature among the current public of Durban. It is to be hoped that there will be some action taken to replace the plaques well in advance of Remembrance Day in November this year. The excuse is being made that this area is a crime scene. Incorrect: it was a crime scene, now it is a blot on the landscape and requires attention from the authorities. Fortunately, photographs exist of the original plaques which should enable accurate copies to be made. This should be a priority. It is our heritage which has been attacked and reparation is immediately due. 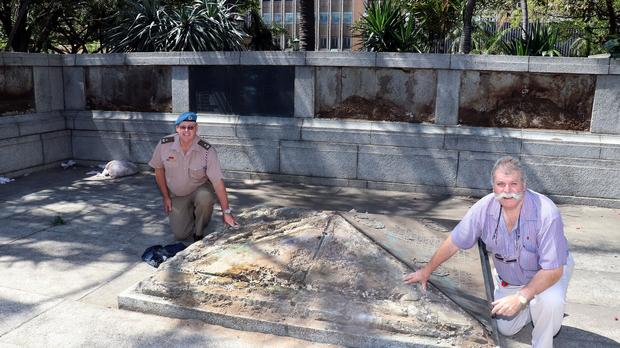 Inspecting the damage to the Cenotaph plaques