Passengers to Natal per Tugela 1865 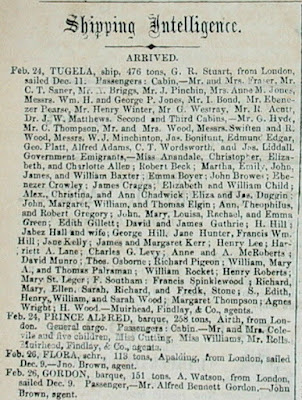 This vessel was one of Rennie's Aberdeen Direct clippers, most of them under 500 tons. The ships of this line took from 49 to 95 days to make the passage direct from London to Durban. On this voyage, under Captain STUART, the Tugela departed Dec 11 1864 and arrived at Natal Feb 24 1865. According to a report elsewhere in the same edition of the Mercury, the journey had been very much protracted by foul winds. She had been within 250 miles of Natal twelve days before her arrival, but had to wait for a change of wind in order to make the Port. "She brings an addition to our population of more than a hundred souls ... Eighty of them came out under Government auspices ... and they seem a happy and very respectable party of settlers."
Note the division of the list into Cabin, Second and Third Cabins and Government Emigrants - but at least the latter are individually named, which wasn't always the case in newspaper columns.

The Government passengers wrote a letter to the Surgeon on board the Tugela, Dr J WRIGHT MATTHEWS, signed by all of them, expressing their gratitude and appreciation for his "assiduous attention", affording them the benefits of his medical skill during the voyage and the alacrity with which he had answered every call in case of sickness. The saloon passengers wrote a similarly congratulatory letter to the Captain, expressing themselves fortunate "in our vessel, in the officers and crew" as well as the Captain himself, and that "should we have again to commit ourselves to the perils of the deep, may we have the good fortune to meet with so good a ship and so excellent a commander."

This polite and pleasant custom of a letter of thanks to the Captain was a feature of the earlier voyages, before the anonymity of many sailings and numerous Captains rendered such expressions obsolete.