David Bell VC (1845 – 7 March 1920) was born in County Down, Ireland. Bell was a recipient of the Victoria Cross, the highest and most prestigious award for gallantry in the face of the enemy that can be awarded to British and Commonwealth forces.
He was about 22 years old, and a private in the 2nd Battalion, 24th Regiment of Foot (later The South Wales Borderers), British Army.
He was awarded the VC not for bravery in action against the enemy but for bravery at sea in saving life in a storm off the Andaman Islands.
On 7 May 1867 at the island of Little Andaman in the Bay of Bengal, Private Bell was one of a party of five who risked their lives in manning a boat and proceeding through dangerous surf to rescue some of their comrades who had been sent to the island to find out the fate of the commander and seven of the crew, who had landed from the ship Assam Valley and were feared murdered by the cannibalistic islanders. 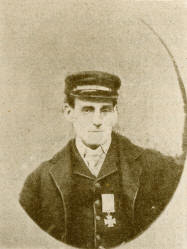 He later achieved the rank of sergeant and died Gillingham, Kent, 7 March 1920. His Victoria Cross is displayed at the South Wales Borderers Museum in Brecon, Powys, Wales.

'The four Privates behaved in ... a cool and collected manner, rowing through the roughest surf when the slightest hesitation or want of pluck on the part of any one of them would have been attended by the gravest results. It is reported that seventeen officers and men were thus saved from what must otherwise have been a fearful risk, if not certainty of death.'

One of the party, Private William Griffiths, awarded a VC for gallantry in the same incident, later died at Isandlwana 22 January 1879.