Passengers to Natal per RMS Saxon 1867 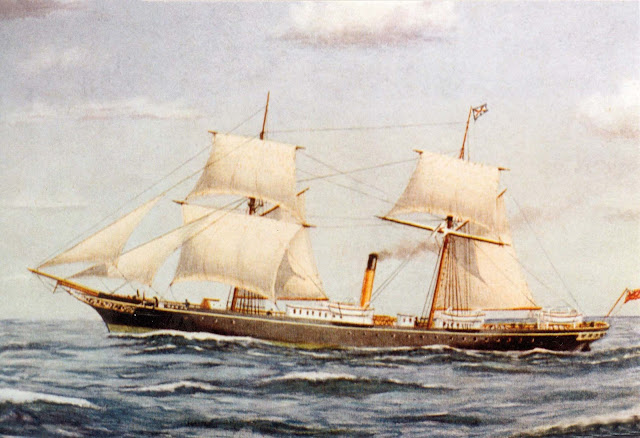 Built in 1863 at Southampton, the Union liner Saxon was 1,142 tons and a sister to the Roman. Her maiden voyage to the Cape in 1863 was made in the record time of 31 days, which she later improved upon reaching Cape Town in 28 days out of London. According to the mail contract 38 days was the allotted time taken by the Union steamers. In 1870 her graceful lines - and her speed - were spoilt by the addition of a poop, and in 1876 she was sold to a company in Hull who renamed her Benguella. She was lost at sea in 1890.

The Natal Mercury reported:
This steamer arrived at the outer anchorage about two o'clock yesterday afternoon, after a quick run of less than five days from Cape Town, which she left on the 18th inst., having arrived there at 8.30 p.m. on the 15th, also in five days from Natal.

The Saxon left Algoa Bay at noon on Monday, the 23rd.
The Roman arrived in Table Bay on the 16th with the English mails of March 10th. Her news of course has been mostly anticipated by the Mauritius mail.
The mails were landed with very prompt dispatch by the tug, and delivered with the dispatch usual on such occasions at our post office.