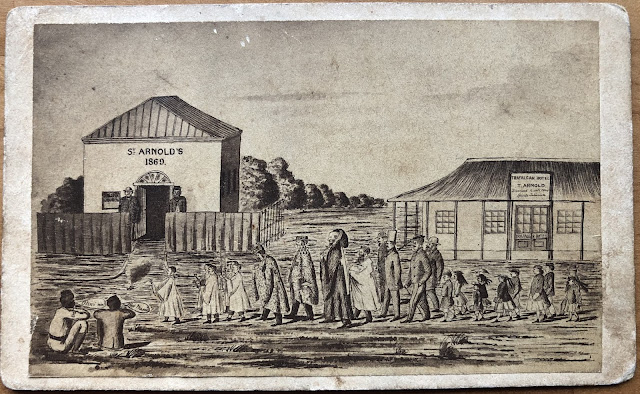 Colenso, Bishop of Natal, after writing material which was considered shocking by his ecclesiastical peers, was found guilty of heresy and in 1865 was deposed as Bishop. Civil law however supported him and enabled him to keep properties vested in his name (though the missionary societies such as the SPG withdrew their financial support of Colenso), and he continued as Bishop of Natal until his death in 1883. This created a schism in the Anglican Church in Natal and in 1867 William Kenneth Macrorie was appointed Bishop of Maritzburg.

Bishop Macrorie came to Natal after the controversial excommunication of Colenso, who had written in criticism of the literal word of the Bible e.g. he found he could not believe in the Flood and his missionary approach to the native population was brought into question as well. This all brought him into conflict with the Anglican Church authorities in the Colony. The resulting schism
caused some Anglicans to remain loyal to Colenso and others went over to Macrorie. It was a huge ecclesiastical scandal in the Colony.

Thomas Arnold, quite an influential colonist, supported Macrorie and Arnold's hotel billiard room was used by the 'Arnoldites' to hold services where Macrorie officiated - presumably the building on the left as seen in the drawing above. Arnold's Trafalgar Hotel appears on the right.

2 Feb 1869 was the date the newly-arrived Macrorie first worshipped in Natal and this procession may have been intended to portray this first visit to Durban for that purpose.

Artist unknown. For more on the controversy see Colenso Letters from Natal (ed Wyn Rees) and entries under Macrorie and Colenso on Wikipedia.

Thank you Andrew - unsurprisingly you understood the emotions at work here. I do wish I knew the artist's name.

Thank you Mole for such a thought-provoking post. The painting is a fascinating parody, clearly with a pro-Colenso bias - reference to the evils of alcohol and tobacco. The two African boys poignantly capture the confusion created by internal politics between missionary societies delivering Christianity to the indigenous peoples of the Natal colony.