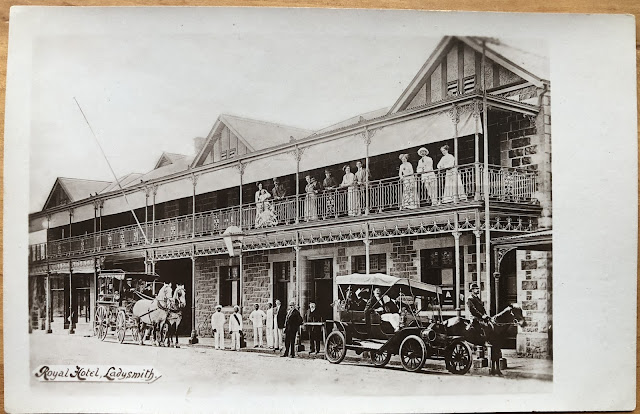 The Royal Hotel, Murchison Street, Ladysmith, Natal, photographed in 1912 by F Atkinson, of whom no details are currently known. The owner of the hotel was William Marshall Arnold of Ladysmith, who got into hot water in 1898 when he was summoned in the Magistrate's Court for the Klip River Division as follows:


Marshall Arnold of Ladysmith Hotel and Bar Keeper that he personally
appear before this Court at Ladysmith on the 21st October 1898 at 10
o'clock in the forenoon then to answer and abide the judgment of this
Court upon the complaint and information of the Local Board of the
township of Ladysmith that the said WM Arnold is guilty of the crime
or offence of contravening Section 65 Act 38 1896 In that on or about
the 15th October 1898 and at the Royal Hotel premises in Murchison
Street Ladysmith he being then the holder of a Hotel Bar License for
the said premises for the sale of intoxicating liquor did wrongfully
and unlawfully sell or keep his Bar or Buffet premises open for the
sale of intoxicating liquors and did supply persons namely James
Cairns of Ladysmith and Sergeant Lloyd of the Royal Irish Rifles with
certain intoxicating liquors to be drunk on the aforesaid licensed
premises between the hours of 11 'o clock at night and 6 'o clock in
the morning the aforesaid persons not being sleeping or boarding on
his hotel premises and to produce his liquor license and deliver the
same to the Magistrate on the day of hearing.
Serve on the said defendant a copy of this summons and then return to
this Court on that day what you have done thereon.
Given under my hand at Ladysmith this 17th day of October 1898
(Signed) HJ Colenbrander
Clerk of the Court

He was found guilty, appealed and had his appeals denied.


Acknowledgements to Dale Schultz
Posted by Mole at 12:08 PM

Comment from Brian K: The annual licensing reviews for 1896, 1897, 1898 show that a William Arnold owned the Royal Hotel but with the next review ion 24 July 1899 Charles Jones was the owner.