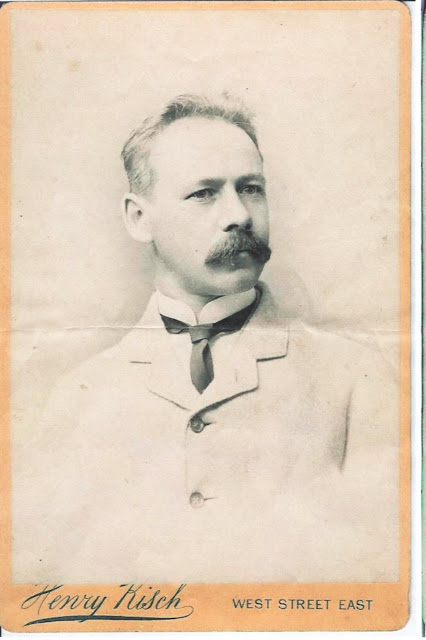 John Brand Martin was born in Fife, Scotland in 1857, and died in Durban in 1926. He was sent to Australia in 1910 to give evidence at a court hearing regarding a little-known event of a dredger that disappeared without trace between Durban and Australia. This is how it was reported in Lloyd's List 27 Dec 1906:

All hope for the safety of the [steam] suction dredger Walrus has been
abandoned.  She is now nearly 100 days out from Durban and even should
she still be afloat, her crew must long since have been starved and her
coal supplies completely exhausted.  Having been bought in South Africa
for the Geelong Harbour Trust, the vessel sailed from Durban on Aug 13
for Geelong via Western Australia with 653 [? indistinct] tons of coal
and a stock of provisions sufficient to maintain her crew of 23 hands
for 60 days.  Just before commencing this voyage the master [Capt
McDonald] intimated his intention of following the course of latitude
29S and to make for Fremantle or Albany to replenish supplies of coal
and food.

Since leaving Durban, however, the Walrus has not been spoken or
reported.  Under ordinary conditions the little vessel should have
reached Western Australia within 50 days.  This period expired several
weeks ago.  Taken in connexion with the loss of the dredger Octopus,
which was also bought from the Natal Government by the Geelong Harbour
Trust, and which sprang a leak a few hours after leaving Durban on Oct
13, and was abandoned, three lives being sacrificed, an opinion is
expressed in shipping circles generally that dredgers of the Walrus and
Octopus class were never intended for a long sea voyage, and that they
should have been prevented from sailing from South Africa for Australia.


The wreck was never found.

More about J B Martin:

THE MISSING DREDGER
WALRUS.
LIST OF THE CREW.
Melbourne, October 29 1906