The Noon Family in Natal: Mormonism and Sugar

In the Natal Mercury of March 20 1863 there appeared the following paragraph:

Adolphus Henry NOON (the Mormon Elder mentioned in the above extract) and his brother Arthur N. NOON were sugar planters on the Isipingo River from about 1860 to 1863. Their sisters were Clara Jane and Susan Noon. Clara is better known as the wife of Richard ('Dick') King, also of Isipingo, the Natal colonist who undertook the famous ride to Grahamstown in 1842, taking news of the besieged British Garrison at the Port and enabling reinforcements to be sent by HMS Southampton and William BELL's schooner Conch, which ended the siege. The younger Noon sister, Susan, married another famous Natalian, Robert Bristow TATHAM. A brother to the Noon siblings, Charles, died in England in infancy; Kent was their home county, and all were born and baptized there.

A sketch entitled 'A.H. and A.N. Noons' Sugar Mill, Isipingo South Africa 1863' shows the mill building as it looked when the brothers sold their Isipingo Estate. It gives a delightful glimpse into the Natal sugar industry at the time, with small turbaned figures of the indentured Indian workers in the foreground, some returning from the fields with hoes on their shoulders, others loading bags of sugar into a wagon. (The first indentured labourers had arrived in Natal in 1860.) Could the figure on horseback in the central foreground be one of the Noon brothers - or perhaps merely their overseer? To the right of the picture is a separate figure in a turban, carrying a stick, probably an Indian sirdar in charge of the labour. A dog runs at his heels. The words 'Isipingo Estate' can be seen written faintly on the main gable of the mill.* 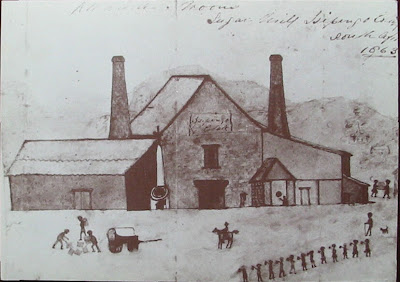 In January, 1863, Elder Henry Aldus Dixon in company with Brother Aldophous (sic) H. Noon, commenced Latter Day Saints missionary work in Natal. They held meetings at Isipingo (Brother Noon's residence), inviting surrounding sugar planters and others to attend. After a few meetings, the congregation grew into a mob which disturbed and tried to break up the meetings. The magistrate and policemen were on the side of the rowdies, protecting them and screening them while trampling the law under their feet. (Source: A History of the South African Mission, Period I, 1852-1903, by Evan P. Wright).

The Noon brothers departed for the United States with a company of emigrants from Port Elizabeth in April of 1865 aboard the Mexicana, settling in Utah and later in Arizona. It was in 1865 that the South African Mission of the Church of Latter Day Saints was closed, possibly why the Noons left Natal in that year.

'No official reasons were given by Church Authorities in Salt Lake City or in England (headquarters of European Mission) for closing the South African Mission in 1865. Perhaps the chief reasons were because of the indifference of the local people, difficulties encountered by the missionaries, and because most of the faithful members had immigrated to Zion. No doubt Satan and his followers rejoiced when the mission was closed, but their victory was only temporary. LDS missionaries were to return to South Africa in 1903 and thereby fulfil the prophesy made by Jesse Haven on May 23, 1853'. (Evan P Wright Part II 1903-1904)

According to Noon descendants, Adolphus was not involved with the Latter Day Saints prior to his arrival in SA. He was quite young when he joined the British army in England (a South African unit which he knew would send him there - he wanted to join Clara in Natal) but just where and under what circumstances he was first associated with Mormonism is unknown. He was a devout journal keeper and produced three, A, B and C. Journal A was the oldest and was heavy with his experiences in South Africa - mainly his Mormon connections. Unfortunately, after he became disillusioned with the movement (in Utah), journal A disappeared; he probably destroyed it. Journals B and C have survived.

Clara Jane Noon remained in Natal and after the death of her husband Dick King, she married a Durban merchant, Joseph Henry RUSSELL.

*The original drawing of the mill, featured on this page, is in the Old Court House Museum collection, Durban, presented by Mr and Mrs A H Noon.

Acknowledgements to Tom Montgomery, husband of Adolphus Noon's great great granddaughter, for information on the Noon family.
Also to Jenny Harries of LDS Family History Library for extracts from the works of Evan P Wright.