The Bluff, Durban's most instantly recognisable landmark, has appeared in innumerable pictures - from engravings and paintings to photographs. For settlers arriving by ship, it was a welcome sight signalling the end of their long voyage and the start of their new lives in Natal. For Durban residents, the Bluff with its arm protectively embracing the city and the bay, is a familiar and comforting backdrop to their daily lives.

Pictorial representations of the Bluff vary greatly. Has it changed in appearance? Generations of artists took considerable licence with its shape - none more so than in the engraving below, dating to about the end of the 1870s. It is fantastic in the true sense of the word, the lighthouse apparently clinging to the edge of a dangerous precipice:


We know this is an exaggerated impression because Thomas Baines left a more realistic, if distant, aspect taken from Currie Road dated 1873: molegenealogy.blogspot.com/2012/11/durban-in-1870s-mr-curries-view.html 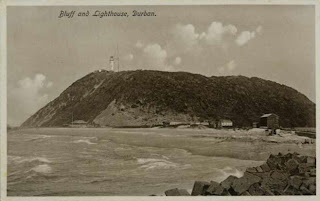 Yet a much later postcard presents a slanting cliff face rather than the rounded end of the Bluff found in other pictures:

An artist named Shrubsole, working in Durban from about the 1890s to 1920s, painted numerous attractive marine views, mostly of the Bluff and the Entrance to the Bay of Natal. Examples are held in the collection of the Local History Museum, Durban, and - the last time I looked - were on display at its satellite, the Old House Museum. Four of Shrubsole's works are reproduced in Nigel Hughes' magnificent volume, Paintings of The Bay of Natal (Privately Published, Johannesburg 2001).

UPDATE:
A painting of Bluff and Bay by Cape artist Ruth Prowse, which was found decades ago on a rubbish heap, sold recently for more than R55 000 at auction in Cape Town: 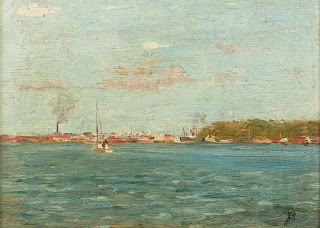