Death at Sea: Tragedy on the Conway Castle 1880

This was the headline in the Natal Witness of January 8 1880 and the original report follows:


A tragic event occurred on the Conway Castle during her voyage out this last time, particulars of which have been furnished us (Advertiser) by a gentleman who arrived here on Melrose and was a witness of the whole affair. It appears that a man named Robert Ross took a steerage passage in this steamer and came out to work for a firm in Durban. He had not been long at sea, in fact was in the Bay of Biscay, when he expressed himself dissatisfied with the arrangements below, and told some to whom he was known that he should sleep upon the deck. This was on Sunday night before reaching Madeira and the next morning (Monday) at 7.30, there was a cry of 'man overboard', and it was found that Ross had disappeared in the sea. The boatswain states that Ross leaped overboard, but there were many who had their doubts of this. Anyway, the ship was stopped for half an hour and Mr Brown, the first officer, in a very smart manner, got a boat lowered and went down himself in charge. The search proved unsuccessful and the boat was hauled up, when, just as the vessel was under weigh, they passed the body floating face upward in the water. The captain was on the bridge, but said it was no use stopping, the man's head was knocked in and he was dead, and the vessel proceeded on her voyage. Our informant asks the rather pertinent questions: How could Captain Jones  know this? And would it not have been more satisfactory to make himself and all on board assured of the fact? For our own part, having known Captain Jones when on the Florence, we cannot believe him capable of doing anything that lacks of courtesy and consideration for the feelings of others, but at the same time are fully convinced of the correctness of our informant's story. Ross leaves a wife and family at home to mourn his untimely end. The passengers on board got up a subscription for them.


The story illustrates the fact that even by 1880, there was a chance that those leaving England for South Africa may well have said a last farewell to their home and loved ones and that the great adventure held as many hazards as did the days of sail.

It's also useful as a practical example of how to find maritime events: the precise death date of the unfortunate Robert Ross is given on www.FamilySearch.org under the collection 'United Kingdom, Maritime Births, Marriages, and Deaths, 1787-1933':  Robert Ross, death, 1 Dec 1879, vessel Conway Castle. The Conway Castle reached Natal by 8 January 1880 but the death at sea occurred about a month before while the ship was in the Bay of Biscay, as reported in the Natal Witness. From the FamilySearch site there's a facility to follow up the information on www.findmypast.com and, for a fee or through subscription to the latter site, to obtain an image of the register page giving further details. 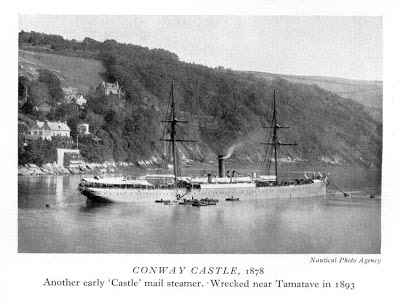 Conway Castle (2,966 tons) built in Glasgow in 1878, was a regular mail steamer until 1883, during which period the above tragedy occurred, and was later transferred to the intermediate service when the Roslin Castle, Norham Castle and Hawarden Castle joined the Line. She underwent considerable improvements in 1892, fitted with triple-expansion engines, her funnel lengthened and with iron bulwarks replacing the open deck rails. The passenger accommodation was upgraded too, with refrigerating machinery and electric light being installed. Not long afterwards, on the Mauritius route, she ran ashore on May 10th 1893 50 miles south of Tamatave while on a voyage to Durban. Her passengers were ashore for 10 days until the Union liner Arab conveyed them to South Africa. But it was the end of the Conway, which could not be brought off the rocks and finally broke up.