Was your ancestor among the approximately 21 000 people besieged in Ladysmith during the Anglo-Boer War?

At the start of the Siege, troops under Sir George White numbered 572 officers and 12,924 men. In this total there were about 10 000 efficient combatants of the cavalry, artillery, irregulars, Natal volunteers and Naval Brigade. Over and above this were 2 000 civilians, 2 440 blacks, 750 people of mixed race, and 2 470 Indians. The total number of mouths to feed thus numbered over 21 000 - of whom no more than half were fighting men. (These statistics appear in With the Flag to Pretoria; there may be slight variations in other sources.)

Brian Kaighin, a specialist in this phase of the Anglo-Boer War in Natal, has compiled two indexes which are an invaluable aid to anyone researching ancestors (residents) who were among the besieged in Ladysmith, or among the casualties, civilian or military. His databases consist of:

1. An index to those resident in Ladysmith up to 1900: over 16 000 names. Note that this also includes certain people from Dundee and Newcastle, since many of these names have Ladysmith connections. The database is an on-going project and Brian would welcome any additional information on the families mentioned.

2. An index to British Military deaths: over 24000 names covering the whole of the Boer War i.e. those Killed in Action, Died of Wounds, Died of Disease, or natural causes. This list is in addition to the list of residents.

Brian mentions that 'information is taken from the births, death, marriages, deceased estates, regimental museums, War Office releases at the time and a register compiled by a local Ladysmith resident, Wally Hyde, of all Natal Casualties.'

If your ancestor was among the besieged, or died during the Boer War, Brian generously offers look-ups in his indexes, currently at no charge. He is also prepared to do further in-depth research for a small fee.  www.ladysmithhistory.com 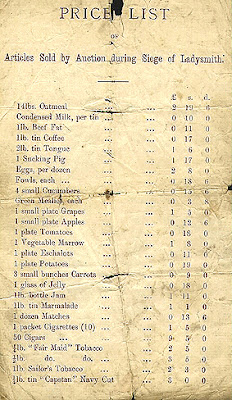