A detachment of Free Staters demonstrated against the British forces at Colenso on 1 November 1899. From Grobler's Heights they shelled the Colenso garrison at Fort Wylie keeping up the bombardment until the evening of 2 November. On the morning of 3 November the British garrison retired on Estcourt.

On 15 November an armoured train was sent from Estcourt to Frere and beyond to establish how far the line could be used for transporting troops. On the train was Winston Spencer Churchill, war correspondent of the Morning Post. The train reached Frere safely and was proceeding towards Chieveley when an advance party of Boers under Adjutant B van der Merwe heard the train approaching and made preparations for an ambush. Three guns and a pom-pom were placed in position and the Boers lay in wait in pouring rain. About one and a half miles from Frere the Boers were sighted and the train stopped, then began to reverse but on rounding the bend the last truck was derailed, toppling out members of the reconnaissance party and platelayers (some of the latter were badly injured or killed in the derailment). The Boers attacked and fierce fighting ensued. Those of the British who had not been killed were taken prisoner, including Winston Churchill. 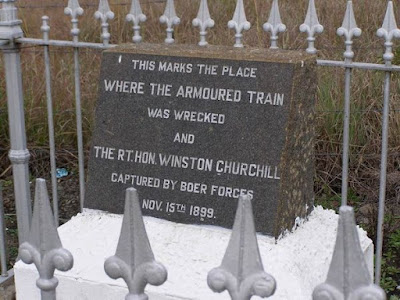 On 6 December 1899, a small graveyard was consecrated to those who fell at Chieveley. Over 2 000 troops were present and the Dublin Fusiliers, who with the Durban Light Infantry had borne the brunt of the fight, were the last to march past in honour of their comrades.

The monument shown commemorating the wreck of the armoured train and the capture of Churchill was originally erected in 1917.


...two figures in plain clothes appeared on the line ...'Boers!' My mind retains its impression of these tall figures, full of energy, clad in dark, flapping clothes with slouch, storm-driven hats, poising on their levelled rifles hardly a hundred yards away. I turned again and ran back towards the engine, the two Boers firing as I ran between the metals. Their bullets, sucking to right and left, seemed to miss only by inches. We were in a small cutting with banks about six feet high on either side. I flung myself against the bank of the cutting. It gave no cover. Another glance at the two figures; one was now kneeling to aim. Movement seemed the only chance. Again I darted forward: again two soft kisses sucked in the air; but nothing struck me. This could not endure. I must get out of the cutting ... I jigged to the left and scrambled up the bank ...I got through the wire fence unhurt. Outside the cutting was a tiny depression. I crouched in this, struggling to get my breath again. Fifty yards away was a small platelayer's cabin of masonry: there was cover there. About 200 yards away was the rocky gorge of the Blue Krantz River; there was plenty of cover there. I determined to make a dash for the river. I rose to my feet. Suddenly on the other side of the railway ... I saw a horseman galloping furiously, a tall, dark figure, holding his rifle in his right hand. He pulled up his horse almost in its own length and shaking the rifle at me shouted a loud command. We were forty yards apart. That morning I had taken with me, Correspondent-status notwithstanding, my Mauser pistol. I thought I could kill this man, and after the treatment I had received I earnestly desired to do so. I put my hand to my belt, the pistol was not there. When engaged in clearing the line, getting in and out of the engine etc, I had taken it off ... I was quite unarmed. Meanwhile ...the Boer horseman still seated on his horse and covered me with his rifle. The animal stood stock still, so did he. I looked towards the river, I looked towards the platelayer's hut. The Boer continued to look along his sights, if he fired he would surely hit me, so I held up my hands and surrendered myself a prisoner of war.

'When one is alone and unarmed,' said the great Napoleon ...'a surrender may be pardoned.' ... my captor lowered his rifle and beckoned to me to come across to him. I obeyed. I walked through the wire fences and across the line and stood by his side. He sprang off his horse and began firing in the direction of the bridge upon the retreating engine and a few straggling British figures. ... when the last had disappeared he re-mounted and at his side I tramped back towards the spot where I had left Captain Haldane and his company ... They were already prisoners ... We continued to plod on until we reached the general gang of prisoners and found ourselves speedily in the midst of many hundreds of mounted Boers who streamed into view, in long columns of twos and threes, many holding umbrellas over their heads in the pouring rain.

It was not until three years later, when the Boer Generals visited England to ask for some loan or assistance on behalf of their devastated country, that I was introduced at a private luncheon to their leader, General Botha. We talked of the war and I briefly told the story of my capture. Botha listened in silence; then he said, 'Don't you recognise me? I was that man. It was I who took you prisoner. I, myself,' and his bright eyes twinkled with pleasure. Botha in white shirt and frock-coat looked very different in all save size and darkness of complexion from the wild war-time figure I had seen that rough day in Natal. But about the extraordinary fact there can be no doubt. He had entered upon the invasion of Natal as a burgher; his own disapproval of the war had excluded him from any high command at its outset. This was his first action. But as a simple private burgher serving in the ranks he had galloped on ahead and in front of the whole Boer forces in the ardour of pursuit. Thus we met.