The photographer W E James first emerged in Durban in 1874 operating a studio at Central West Street. By the time he took the photo of the Bell family group currently under discussion he had a studio at the Point, Natal. This is evidenced by his tradeplate on the back of the photograph. [See previous post for the group photo.] 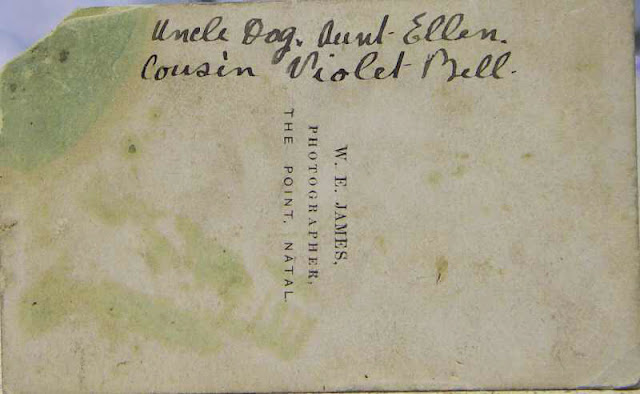 If, as seems indicated by the handwritten note on the back of the photo, the members of the group include 'Uncle Dog' - undoubtedly an error for Uncle Douglas i.e. Douglas Bell - the picture was certainly taken before July 1899, when Douglas Bell died. So that gives a starting point from which to work back to a possible date for the photograph.

The other Bell family members mentioned on the back of the photograph are 'Aunt Ellen' and 'Cousin Violet Bell'. Aunt Ellen would have been Ellen Harriet Bell, daughter of the Captain. Born in 1846, she married Edward Baxter in 1870 (her previous husband was Frederick Wise) and died in 1906.

'Cousin Violet' was Violet Amy, daughter of Sarah Scott Bell (the latter was the third daughter of Capt and Mrs Bell and married Charles Pay in 1874). Violet was born in 1882 and married David O'Donovan in 1907. She looks to be in her teens in the photograph, so it could have been taken towards the end of the 1890s, perhaps 1897 when Violet was fifteen and before Douglas Bell died (1899). The younger girl, ignored in the handwritten note, is likely to have been Natalia Beatrice, Violet's sister, born in 1887. She could have been aged about nine or ten, to fit in with our approximate date of 1897 for the picture.

Remember that we are relying on the information provided by the handwritten note being true but there are some small inaccuracies to give us pause e.g. the misspelling of Doug, and Cousin Violet Bell's name would have been Pay not Bell.

The photograph is a cabinet print - these came into use in the 1860s and gradually supplanted the smaller cartes de visite, becoming more popular by the 1890s.

The costume worn by the ladies is not particularly typical of the late 1890s but the Bells probably did not dress in the height of fashion. Violet's hair is piled fashionably on top of her head but Ellen clings to an outmoded cap. The men appear to be wearing Tam O'Shanter hats (traditional working men's headgear and not only in Scotland).