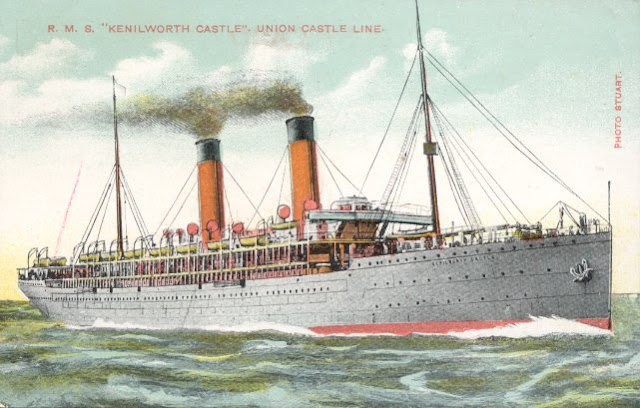 Sister to the Armadale Castle, built on the Clyde, the Kenilworth Castle was built in Belfast. That yard had produced the Norman and her successors for the Union Company. In October 1900 the new Cape mail contract had come into force, the first to be performed by the Union Castle Line, It was the start of a great shipping era and thousands of our ancestors sailed to and from the Cape and Natal on these mail steamers. The arrival and departure of the mailship was a matter for public celebration then, with streamers being thrown between ship and dock and a festival air pervading the port.

In those days the mail steamers would leave Southampton on Saturday afternoons at 5 pm reaching Table Bay at dawn on Tuesday. After proceeding up the coast to Durban they were scheduled to leave Cape Town homeward bound on Wednesday afternoon at four o'clock. A new arrangement came into being in September 1913 when steamers would leave Cape Town for England at 1 pm on Saturday afternoons. The outbreak of war in 1914 upset all sailing schedules until the end of 1919 when Friday afternoon departures at both ends became the norm.

The earliest mail steamers hadn't proceeded farther than Cape Town. It was only in 1863 that the Union Line began sending its vessels as far as Algoa Bay. After 1876 East London was the terminal port then at last in August 1887 the ships were sent to Durban. Early in 1888 the Castle mail steamers which had before turned round at East London now made Durban their terminal port.

All was not plain sailing. A coastal journey was a nightmare especially for passengers going to Natal where the dreaded Bar made arrival or departure a matter of uncertainty and adventure.

'The method of crossing the Bar was by means of cargo lighters which were hauled along on runners on a stout hawser securely anchored outside the rollers. Passengers were battened down in the hold and most were seasick, Not the least exciting episode was transferring from steamer to lighter and when the rolling became pronounced it required all the agility of a trained acrobat to get from one to the other.'

The conquest of the Durban Bar is a story in itself. Victory was achieved in 1904 when the RMS Armadale Castle, Captain Robinson in command, despite battling a south-westerly gale, steamed proudly through the harbour entrance and was soon berthed alongside the wharf. From that time the crossing of the Bar held no terrors for passengers landing or embarking at Durban.