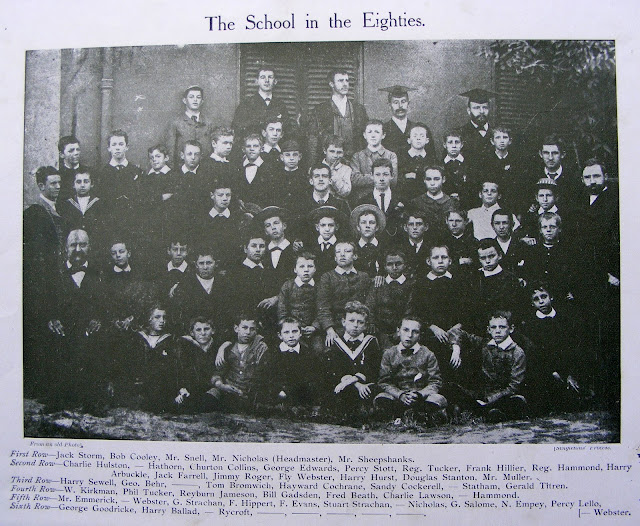 One evening my uncle arrived at our family home unexpectedly bearing a leather-bound volume entitled The Durban High School Record. The book was in poor condition but all the pages were there. He triumphantly pointed out a group photograph entitled The School in the Eighties and drew our attention to a name in the caption: 'Bill Gadsden'. My father was the only 'Bill Gadsden' I'd ever known or heard of - and he certainly wasn't around in the 1880s, having been born in 1910.

His father was Sydney Bartle Gadsden, born in 1880, and not a contender for the 'Bill' in the photo.

This was the beginning of a search for the unknown Bill Gadsden who had attended the Durban High School during the 1880s. For a start, the caption of the photo was not helpful in identifying which boy was meant to be Bill Gadsden - the rows are made up of inconsistent numbers of boys and masters and there are some missing names. However, it seems likely that Bill Gadsden is 4th from the right in the 3rd row - the 3rd row from the front, that is, ignoring the rows' numbering given in the caption.

After the loss of my grandfather's parents he and his sisters were farmed out to various families until the children reached adulthood. It's possible they never saw their brother William who on leaving school was employed as an apprentice on the Natal Harbour Works, later apparently moving to Verulam on the North Coast of Natal where he worked as a carpenter. He married and had one daughter. My father had had no idea this young man existed and was astonished to see the photograph and to hear the results of my research into our mystery family member. To begin with my father was sceptical and found it hard to believe my grandfather wouldn't have spoken of such a close relation. Still, the brothers must have grown apart with the break up of the family and growing up in different foster homes. Whether there were other causes of estrangement remains unknown.

We must also consider that William died in his early twenties - 24 - of enteric fever (a common cause of death in colonial Natal resulting from impure drinking water) on 22.12.1900 at Verulam, Natal. He was probably buried at Verulam cemetery; his grave has so far not been found. His death notice refers to him as Colonial Englishman. My father William Bell Gadsden was born ten years after his uncle's death and remained unaware that there was a widow and a daughter - a first cousin - living not far away from the rest of the Durban Gadsdens.

William attended the Durban Boys' High School from 1888-1892. His address during that time was 'The Point, Durban'. His father was then employed by the Natal Harbour Works.