My interest in all things ZULU was not actually down to the film of that name but as a result of a visit to my old cub-master in Streatham London.  I visit London as often as I can. On one of these visits I went to see Colin, an expert on Red Indian lore and all matters World War One and the Home Guard. As he went into the kitchen to make tea I noticed a book, he has hundreds!, called the 'SILVER WREATH', I flicked through the pages and realised its topic was the garrison at Rorke's Drift which of course the film, ZULU is all about. I had a year or two earlier chanced upon the Donald Morris book, 'Washing Of The Spears' and being the nit-picker I am I felt, although a good read, perhaps it was TOO precise in it's colourful narrative. I felt as though he had to have been there to describe such finite detail of the battles etc. Nonetheless a good book to have in one's library.

I noticed in the SILVER WREATH a man called Pte 1284 Charles Mason of the 24th. Up until then I don't think there had been much, if any literature, on the men of Isandlwana and Rorke's Drift, and anyway, I was not then interested enough to go beyond enjoying the film. I began the many trips to the Family History Centre at Islington, now transferred to Kew. Ironically just a hundred yards or so from this is the London Metropolitan Archives, a place I soon visited many times for records and data. Even more scary was the fact that in this very tight area (now a play park) was a house which Pte Charles MASON knew very well: Skinner St. Mr Hitler and the Lufewaffe took a dislike to this house in the Second World war and sent one of his flying bombs which razed it to the ground.

The SILVER WREATH was the book of its day but I quickly learnt, as in every publication, mistakes abound. This was certainly true of the SILVER WREATH. In the case of Pte MASON, for instance, it describes his place of birth as ALDGATE. This is not correct. In fact he was born in ALDERSGATE, a different area entirely as those who know London can verify. I wrote letters, phoned people (did not have computers in those days). By 1998 I had contact with a man whose influence got me well and truly 'hooked' on all things ZULU. Mr Maurice Jones was as keen as mustard on the Zulu campaign and when I met him I decided that this was the
hobby/interest for me. 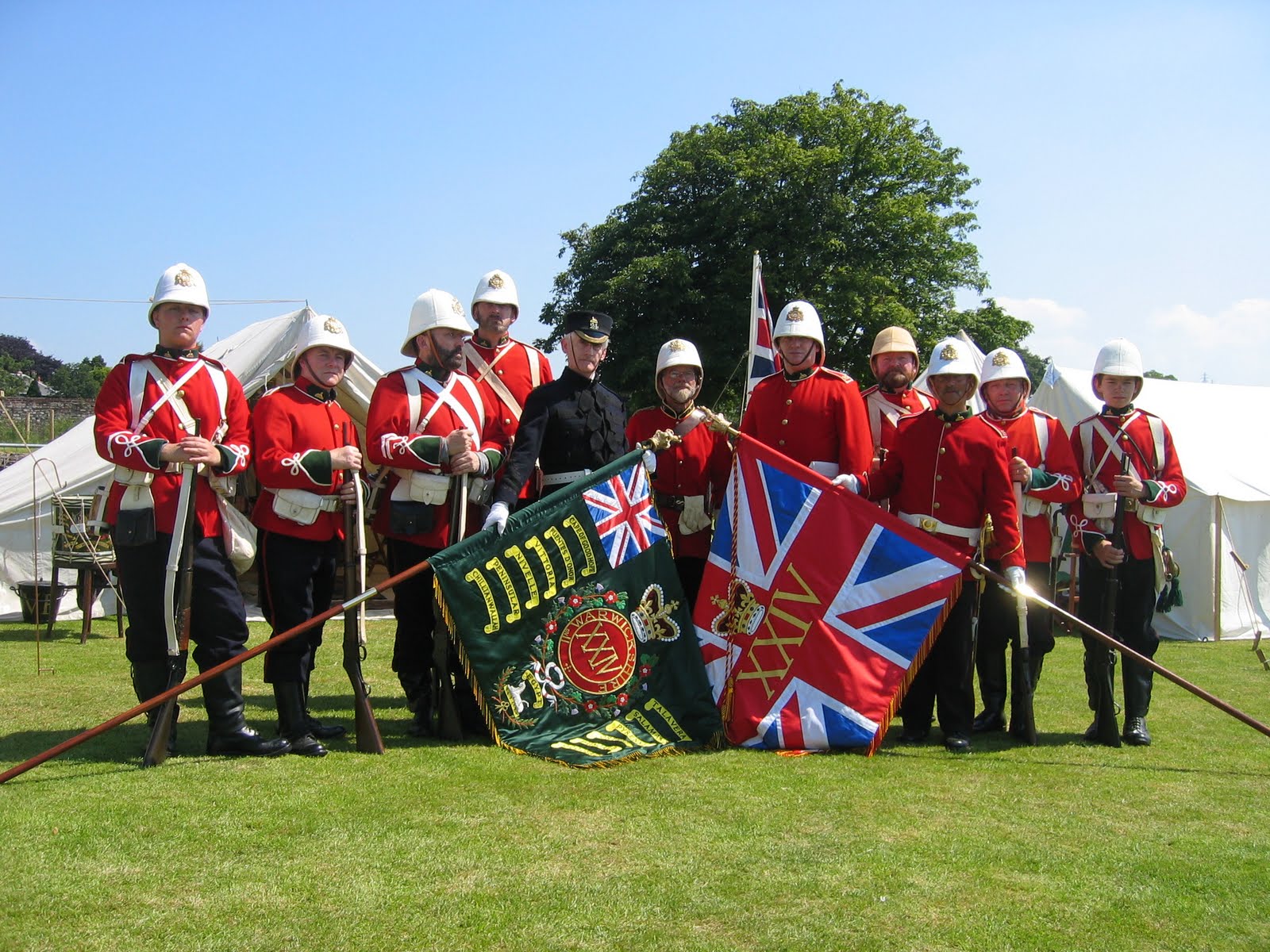 I joined the group he formed and one day I entered into the realms of a re-enactor as a Sapper of c1879 and so began many years of camps and re-enactments. Meanwhile my interest in finding out things increased. One day I was most fortunate to meet Mr Douglas Bourne who is the Grandson of C/Sgt Frank Bourne DCM of Rorke's Drift fame. My skills at research were rudimentary to say the least in those days but I was learning all the time. Eventually I became the Archivist and Record Keeper of the Group founded by Mo Jones (as we know him). Along the way I met descendants of the men who were at Rorke's Drift. One defender had, and still, has a huge influence in my life. The man in question is Fred HITCH VC. More about Fred later.

I often wondered what the life of the ordinary man was like both before and after the events of 1879. London was not the best place to live if you came from such an area as Whitechapel for instance. The grinding poverty and social deprivations can only be wondered at today.
For some, the only escape route was to join the army, often this meant leaving family behind, sometimes forever. Consumption of beer and drink was often the only release both civilian and soldier had. The records are littered with punishments for being drunk and many a soldier was reduced for the over indulgence of the black bottle. One exception to the rule was Pte Alfred Henry Hook, a former woodsman from Gloucestershire. Many have asked why a man from Southgate in London served with a man from Gloucestershire in a Welsh (24th) Regiment. Well first of all the 24th origins are set in Warwickshire and they were an English regiment in the beginning. The policy in Victorian days was for a man to join the army and then depending on which holding brigade he was in (25B in the case of the 24th), the regiment in which he was to serve was determined. This is why Fred HITCH from Southgate served with Alfred Henry HOOK who worked in the Forest of Dean. Fate threw these two together and they became arguably (still to this day) the best researched and well loved Private soldiers bar none. All this I came to learn since I decided to look into the lives and back ground of the Zulu campaign. 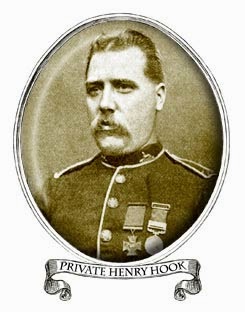 Now I am not a Historian such as the author, Ian Knight, but an amateur genealogist with aspirations of better things. I learnt very quickly that mistakes in a man's life circumstances are often repeated when another author picks up the cudgel and prints another book on the Zulu war.

One example I can quote with certainty is the life of Fred HITCH. So often I have read that he had SIX children and was married in 1880. Both erroneous statements. Fred got married in 1881 and had 11 children, not 6, as has so often been printed in many publications. Three sadly died when quite young. Even the name of Fred's wife has been reported incorrectly so many times. The correct name is EMILY MATILDA MEURISSE. I have been fortunate to stand in the very church in Bayswater, London, where Fred was married and with me, at that time, was his Great Granddaughter, Sandra Barker. I was fortunate to be part of a Blue Plaque ceremony in January 2004 to commemorate the last and arguably most famous address for a Rorke's Drift man: 62 Cranbrook Road Chiswick. Next time you are in Chiswick High St, look for CRANBROOK Road. It has a dog leg at each end and a long stretch. Don't look for the number, just look for the Blue Plaque, now firmly fixed on the wall of his last residence. At the top of SOUTHGATE, near the Underground station is CHELMSFORD Road and just as you start down this road, look up, you will see on a little white marker the name, 'Zulu Cottages 1879' on this tablet. 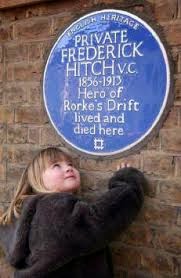 Some men are quite easy to research while others have scant or no records to look into. I discovered that Sgt Windridge, the Senior Sgt at Rorkes Drift, had been married no less than THREE times, he eventually died at the home of his Sister in 1902. I was taken to see a now disused cemetery in which a headstone showed the two persons buried in that spot to be the wife and daughter of one QM Bloomfield who was killed at Isandlwana. Something on the headstone made me realise that QM Bloomfield had been married TWICE and it turned out to be correct and that he had THREE daughters, the eldest being born in 1862 in Mauritius while the other two were born as a result of his second marriage.

I am still trying to determine if I could be related to Pte Charles MASON of Aldersgate, I have no concrete proof one way or the other on this at this time. Ironically we share the same birthday (13th August). He was born in 1855 whilst I was born  in 1950. A distant relative of Pte 1181 William Henry Camp became known to me and at the time one source indicated 'no known relatives', well with research and pig-headedness, well over 100 relatives of WH Camp have come to light. William Henry CAMP died aged 46 in 1900, the same age as his father who died a number of years earlier. The final resting place of WH Camp still has to be located but the burial site of his father has been found. It was often thought that the birthplace of William Jones who won a VC at Rorke's drift, alongside 10 others, was EVESHAM when, in fact, it turns out to be BRISTOL. Again diligent research has shown this to be so.

Men like Pte Gee and Pte Chick still hold great fascination because so little is known about them. Did you know there was a soldier in the 24th who was called Michael Caine (not a lot of people know that)?  Going off on a tangent slightly there was a man called Henry COOPER who has won a VC! No not our 'ENERY, but if you doubt me, look in 'MONUMENTS TO COURAGE' by David Harvey and you will find him. Try as I may, I have yet to find the woman that later QM Bloomfield first married, and the mother of ELLEN BLOOMFIELD the eldest daughter of three, (two by his second marriage). Such is the nature of research .

Research has shown that William JONES did not send his baby son back from South Africa when his wife died but that the child born in 1877 was with his grandparents at the time of the 1881 Census. Sadly the wife of William Jones died in Durban and the exact location of her grave is still unknown. The actions of January 22nd 1879 were but one day and what happened to those men after that day? I can't claim I found all by myself, as many others have told me, or have worked alongside me, on this journey of discovery. My thanks to those and to those with far greater knowledge than I in these matters. When the 'SILVER WREATH' was first published there was no other bench mark for accuracy and Norman Holmes, were he alive today, would no doubt be amazed at how his original work has been adjusted in so many ways. The 'NOBLE 24th' is the follow up to the 'SILVER WREATH' and I hope in my lifetime not only to go to South Africa but to be part of the NEXT reprint of Norman Holmes's original work.

Say to yourself, "Am I related to a man who fought in the Zulu war of 1879?". You may know that answer, you may not. There are a lot of people out there who can help if needed, I hope I can help if asked.

Thanks for sharing this sites!
Medallions
Cast plaques