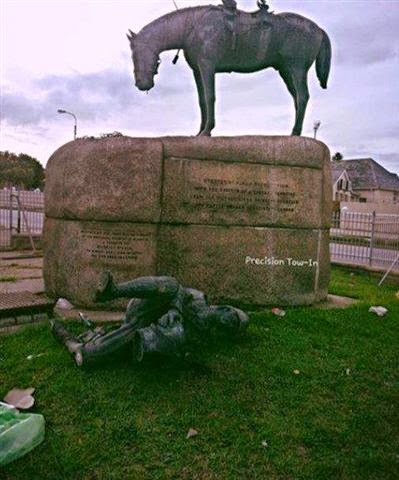 The vandalised horse memorial at Port Elizabeth:
another in a spate of inanimate objects under attack by people
who have no understanding of history.

The Horse Memorial is a provincial heritage site in Port Elizabeth in the Eastern Cape in memory of the horses that served and died during the Anglo Boer War'
The total cost of all the horses acquired for the war was around 7 million pounds. More than 300,000 horses died in British service in South Africa.
The memorial was described in the Government Gazette as:

This memorial, designed by Joseph Whitehead and cast in bronze by Cox and Company, Thames Ditton Works in Surrey, was unveiled on 11 February 1905 by the Mayor of Port Elizabeth, Mr Alexander Fettes. The monument commemorates the horses that suffered and died during the Anglo-boer War (1899-1902) consisting of life-sized bronze figures of a horse about to quench its thirst from a bucket held by a kneeling soldier, together with the inscribed granite plinth on which it stands and the base of which incorporates a drinking trough.

'No understanding', sums it up, Mole.