Newspaper reports in the and elsewhere have proved a vital source for the activities of Captain George Henry Caithness. As master of merchant vessels trading in waters off the southern and eastern coast of there would be few if any occasions when he generated public records.

It’s clear that he was present at the Cape from at least August 1852 (when he was present at his nephew's baptism) and that he sailed the schooner Pet between and during the later 1850s. (Several references to the Pet emerged from searches of the British Newspaper Archive online.)

At the age of forty, George married his second wife, Leopoltina, at Port Natal.
A more settled phase – if there can be such a thing in the life of a master mariner – followed and by the mid-1860s ‘Caithness, George H’ appears listed in the Cape Almanac, as ‘Master Mariner and Ship Owner’ at Central Wharf and 7 Church Square and later at Upper Roeland Street, Cape Town.

The and Natal News of 25 April 1864 mentions George Caithness in the unusual role of passenger on a ship called Fontabelle, 537 tons, the captain of which had been lost overboard. George had taken command and brought the vessel into , no doubt much to the relief of all who sailed in her. However, when he claimed 150 pounds salvage it led to a case in the which George lost; he received 25 pounds. 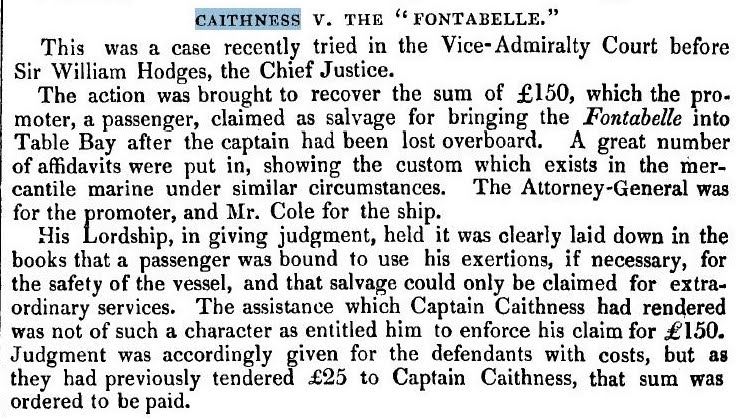 He was in the news again in mid-1866 when he offered to take 500 pounds worth of shares in the Buffalo Steam Shipping Company if they would give him command of ‘the new boat’ (unnamed) whereupon he would ‘proceed to England and superintend the building of a boat fitted for the bar.’ This may refer to the mouth of the  forming the had a problem similar to Port Natal – a sandbank or bar across the entrance. Perhaps the Buffalo Steam Shipping Company was slightly premature as it was only in June 1872 that the first steamship crossed the bar of the . 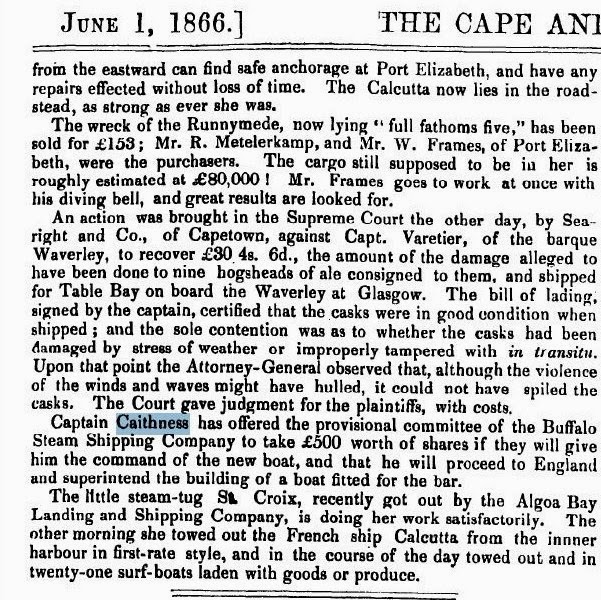 Although it seems unlikely that this venture prospered, George must have been doing fairly well as the ever-watchful Cape and Natal News on 22 April 1867 mentions his purchase, for 650 pounds, of nine cottages situated between Alice and Evatt Streets, Port Elizabeth.*

*Evatt Street is named after Captain Evatt who commanded from 1817-1847. He supervised the landing of the 1820 British Settlers who were brought to shore under the protection of his soldiers and were provided with provisions and tents. Originally at St Mary's Anglican Church in the city centre Evatt’s grave was later moved to its present position next to the wall of . This fort, built for defence against a possible landing of French troops, overlooked the site of what later became and is now a monument.