In the 1861 Census Morton appears aged 31, ‘born at Upton House, ’. If the Gadsdens were living at Upton House at the time of Morton’s birth in 1825, they had moved on by 1827 (and research proves this was the case) because in that year Joseph Lister, later to achieve fame as the founder of antiseptic surgery, is recorded as having been born there.

Was Morton stretching the truth for the benefit of the census enumerator and was he actually born at the rather than at Upton House? Had his remarkable Christian names given him a touch of folie de grandeur? Perhaps this is unfair: after all, the Gadsden family’s connection with West Ham goes back to Morton’s grandfather John Gadsden b 1759, who in his will of 1815 mentions his ‘Freehold piece of Land situate at Upton in the parish of West Ham, in the County of Essex’. This may equate to the property on which Upton House stood.

Upton House was one of a number of mansions built by City merchants in the 17th and 18th centuries at West Ham. Here they could retreat from the noise and bustle of and enjoy rural pursuits.  During the 18th century and until about 1850, West Ham was an area of large houses in extensive grounds. In 1762 the number of houses in West Ham parish was stated to be 700, of which ‘455 are mansions and 245 cottages’.

Whatever definition be given to mansions, this seems too liberal a proportion, but five or six years later, Morant, the historian of , describes West Ham as ‘the residence of several considerable merchants, dealers and industrious artists’.  (Source: Handbook to the Environs of by James Thorne)

A century later, the character of West Ham had changed - and not for the better - with the coming of the railway and various factories. However by 1876 was still a ‘pretty, rural hamlet … little more than a mile northeast of ’, so while the family were living at in the 1820s the area no doubt retained much of its country atmosphere. 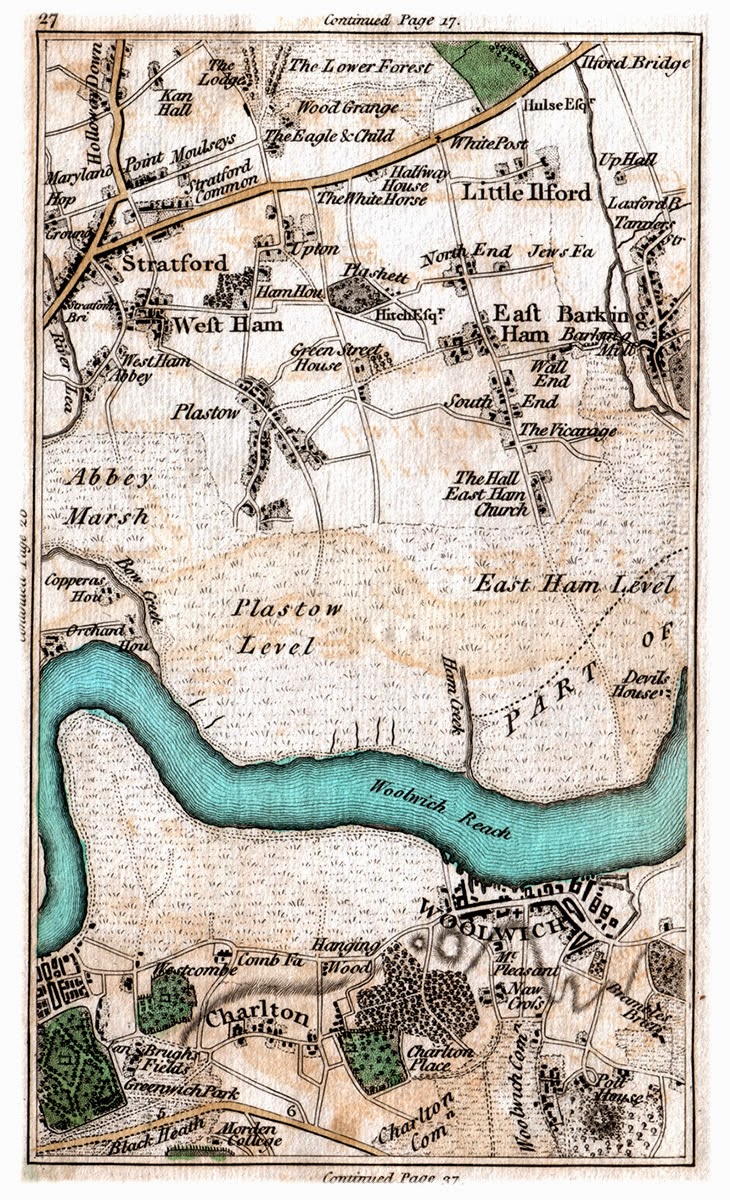 Opposite Upton House was Ham House, confusingly enough also referred to as Upton House during part of the 18th century. They were distinct and separate residences. Ham House was the seat of the Quaker philanthropist, Samuel Gurney. In fact several members of the Quaker community lived at in the early 19th century including Gurney’s sister, Elizabeth Fry, the prison reformer, and Joseph Lister, who was born at Upton House (i.e. the residence associated with the family).
(Source: History of East & West Ham by Katharine Fry p 234)

Research into the Upton House matter led to the finding in the registers of All Saints, West Ham, of the baptismal record of John and Mary Ann Gadsden’s eldest son. This establishes once and for all that he was named Morton Champnes (with one ‘s’) Nevins and not Morton Champness Kevins as previously transcribed by other researchers.

A marginal note in the All Saints register reads:  ‘According to the certificate by the Rev Ch. Champnes Rector of St Botolph’s Billingsgate transferred to me Aug 1826  J.W. Burton’. It seems that the baptism actually took place at St Botolph’s, a copy of the record later being sent to West Ham where the family then resided.

The reason for the delay of a year between the birth of Morton and the entry in the West Ham register is not clear. It's possible that Rev Champnes conducted the baptism, either at St Botolph’s Billingsgate or privately, because he was a friend or relative of the family. Private baptisms sometimes took place when a baby was not expected to live, those that survived being ‘welcomed into the congregation’ at a later date. With the appearance on the scene of the Rev Champnes, the origin of part of Morton’s remarkable name is explained.

A search of St Botolph’s register found no entry for Morton between August 1825 and August 1826. Some baptisms by Rev Champnes were noted in 1827 at St George, – this parish was united with St. Botolph’s Billingsgate.  The full entry in the All Saints register reads: ‘1826 Aug 17 Morton Champnes Nevins son of John and Mary Ann Gadsden born Aug 8 1825, abode: . Quality, trade or profession: Esquire’. Upton House is not mentioned. However, the term Esquire would probably indicate that John Gadsden was a man of some standing and it is not impossible the family were indeed living at Upton House.

The history of this building thus took on a greater significance for me. A picture of Upton House emerged in Stephen Pewsey’s book , West Ham & the Royal Docks, published as part of the in Old Photographs series (Sutton Publishing 1996). Apparently an earlier structure had existed on the site, because Upton House was rebuilt in 1731. If the did live here, during their term of residence it would have looked precisely as shown in Pewsey’s book (p 34).  Unfortunately, the house was demolished in 1968.

Another useful illustration in the above publication was Chapman & Andre’s map of 1777. These cartographers produced the first accurate large-scale map of , at a scale of 2 inches to the mile, enough to show individual buildings. The relevant section shows the parish of West Ham. The southern half of the parish was the marshland of Plaistow Level, used for cattle grazing. In the north there were three settlements, , along Ham, clustered round the parish church, and Plaistow, around the village green. Other hamlets included and Maryland Point. The area would not have changed much by the early 1820s when the family were living at .

Its proximity to  was the key to West Ham’s growth.  and West Ham were gateway districts between Essex and . Pewsey states:

‘West Ham lies on the east bank of the River Lea and so before inexorable growth ... it was the last place in Essex before London and the first staging post in Essex from London … The great Roman road between London and Colchester was diverted through Stratford in the 12th century when Bow Bridge was built.

The largest settlement in West Ham, , developed due to two factors: bread and cattle. Corn from was brought to the many windmills and watermills along the Lea and its back rivers. Flour from the corn was turned into bread using ovens fired with wood from , which then stretched down almost to the .  bakers were exempt from City guild controls and were frequently in court for giving short measure. Cattle were brought to from the eastern counties for slaughter or onward transit to , and tanning and other leather-based industries developed there. The presence of a large monastic foundation with many royal connections, Stratford Langthorne Abbey, no doubt attracted further wealth to the area.

The River Lea was the stimulus for further early industrial activity. Silk-weaving and calico-printing were undertaken in the 17th and 18th centuries and Bow porcelain was made in in the mid-18th century. Distilling and gunpowder-making were also important.

The rest of the parish comprised a scattering of small agricultural hamlets which included Plaistow, , Forest Gate and Upton. The marshland in the south of the parish was used for grazing cattle and pasturing horses. Places like Upton and Plaistow were pleasant enough rural retreats to attract City merchants who built substantial houses there. By the late 19th century the separate hamlets of Plaistow, Stratford, Upton, Canning Town and Forest Gate had merged in a sea of bricks and mortar and West Ham was the eighth largest town in Britain.’

It would be unrecognizable today to John and Mary Ann Gadsden as the picturesque rural spot where they spent the halcyon days of their early married life, and where their first two children were born. By 7 November 1828 they spent some time at Clapton, as shown in the register of St John Hackney, where their daughter Mary Rochenda was baptised, having been born in the July of that year.  She died aged only four months and was buried 24 November 1828, also recorded at St John Hackney.

Their next child, another daughter, Emily, was born in July 1830 in , , where a new chapter of this family unfolded.