Death of a boxer: but who was he?

The above report in the Evening Telegraph of 15 March 1926 tells a sad story but also presents a conundrum: there is no death record for a William James Godson, given as the real name of boxer Billy Gibbins of , aged 27, who died during a match against Edward Ferry.

There is, however, a death registered in Hackney for a William James Gadsdon. Some sleuthing turns up a relevant baptism at West Ham Essex in 1898 for a child of that name born to William James Gadsdon snr and his wife Julia (born Peterson). The age of the boxer is slightly out.

Apparently, Billy Gibbins from boxed between 1925 and 1926. He had three professional contests – a brief career and a tragic end.

His opponent, Edward Ferry, was in all likelihood Ted Ferry from Bethnal Green who had a more successful career than Gibbins: Ferry boxed between 1922 and 1937 in 188 professional contests.

There was another Billy Gibbins, a boxer of who was shot in the stomach in 1931. And another from fighting in the 1930s. Anyone know who the original Billy Gibbins was who inspired these boxers to carry his name into the ring?

If you have a boxing ancestor try Find A Boxer at www.boxinghistory.org.uk/alist.html 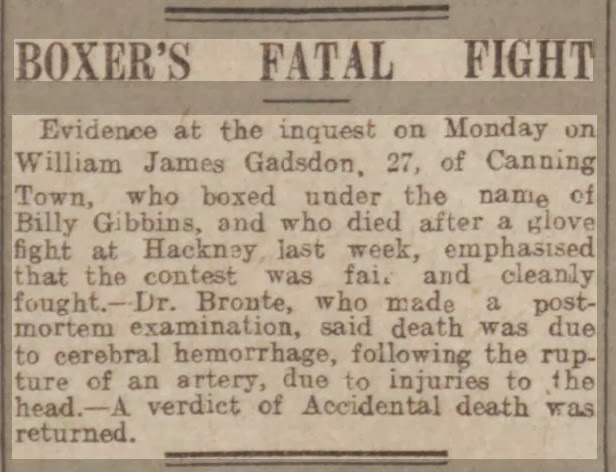 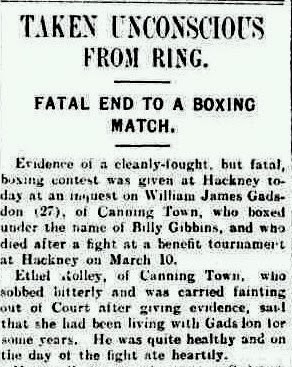 Acknowledgment:
Celia Dodd
Posted by Mole at 7:10 AM

Mole, an injury such as this would in all probability have been an extradural haemorrhage, resulting from a blow to the temple (fractured temporal or parietal bone)causing a laceration of the middle meningeal artery. The bleeding and clot would compress the brain resulting in coma and death. Successful treatment can be implemented by drilling holes (burr holes) into the temporal bone to evacuate the blood and clot. Sadly this was not the case, Andrew