Family historians are constantly warned about the dangers of inaccurate data appearing on genealogy websites and it’s certainly wise to check facts given on internet against original material wherever possible.
However, don’t believe everything you read in printed sources, either. Even apparently authoritative publications may include inaccuracies. Take these as gospel and your family history narrative could be a mine-field of perpetuated errors.

When I began my research (in pre-internet days) into my great great grandfather, Captain William Bell, I found several references in published works which described him as a Scotsman, born in Dumfries. The truth (which took years to establish) is that Bell was born (1807) in the parish of Bowness-on-Solway, Cumberland, England. His parents, Thomas and Elizabeth Bell, were then living in the village of Glasson, in that parish. Their son William was baptized at the Bowness parish church, St Michael’s, as proved by the register entry. The Bells had been in the same district for several generations.

Despite my efforts to put matters right, there are still pockets of resistance regarding Bell’s true birthplace. But how did the confusion arise? It’s impossible to be certain, though there is a reference to another completely unrelated William Bell in Cape records who was born – you guessed it – in Dumfries! A simple case of mistaken identity?

In later years members of the Bell family lived in the village of Drumburgh - not far from Glasson where William Bell was born. The locals, as I discovered when I visited the area in 1991, pronounce Drumburgh as 'Dumbruff' (or that is as close I can get, phonetically). Was this obscure hamlet muddled with the better-known place-name of Dumfries? It requires a stretch of the imagination. The entry for William Douglas Bell which appears in a volume of South African Biographies gives his birthplace as Drumburgh, 'before 1822' (Bell was born in 1807 in Glasson). The same source mentions his parents' names as William and Elizabeth Bell: they were actually Thomas Head Bell and Elizabeth (nee Millican).

Another controversial point is the Captain's middle name, frequently given as Douglas. At what stage of his career this was added is not clear. His baptismal entry simply states William. This isn't particularly unusual: the parents may not have decided at that point whether to give the child any middle names. When Bell married Mary Ann Caithness at Algoa Bay (Port Elizabeth) on 28 June 1838 he was plain 'William Bell, Bachelor'. By the 1840s he begins to appear in records as William Douglas Bell and, to confuse historians further, names his first son William Douglas Bell. This choice may have caused difficulties during the Captain's lifetime, as in most sources the son's forenames are given in a different order: Douglas William Bell. The significance of the name Douglas has yet to be explained.

After Captain Bell's services during the conflict at Port Natal in 1842, he is said to have been offered, by Queen Victoria through the Governor of Natal, a grant of land on the Berea, which Bell declined because he was a seafaring man. Instead, he accepted a pair of gold epaulettes to wear on his 'uniform on special occasions'.

This is the stuff of family legend but regrettably, despite the fact that it's mentioned in the volume of biographies mentioned above, there is no documentary evidence to support the story*. Bell was a merchant mariner before he became Port Captain at Natal; he never served in the Royal Navy and would not have been entitled to wear naval uniform. It's probable that the double-breasted frock coat (as seen in the best-known photograph of Bell), trimmed with braid on the sleeves as well as epaulettes (ornamental shoulder-pieces), was made to Captain Bell's own design when he was in office as Port Captain. The anchor shown in the photograph is real enough, as is the brass Dolland telescope tucked under Bell's arm. Until comparatively recently the telescope was in the possession of one of Bell's descendants

Captain Bell's life was sufficiently action-packed and unusual to make any mythical embellishments unnecessary. There's no harm in acknowledging the fiction as long as there's no pretence that it is fact.

*Reported in The Natal Mercury, April 9 1927, in an article on John Chalsty, 'last of Captain Bell's men'. 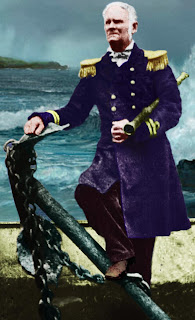