After a lifetime of researching my ancestry it remains a thrill to hear from distant cousins. In this case, the distance is merely a matter of geography: Sheila, now living in Texas, is my third cousin; we share a great great grandfather in the person of Captain William BELL (1807-1869). [For further details about Captain Bell see post on this blog: Saturday April 10 2010, Remembering a Mariner.]

Sheila's great grandmother, Sarah Scott BELL b 1847, was the sixth child of Capt Bell and his wife Mary Ann (nee CAITHNESS). Sarah, who was in her early twenties when her father died, married Charles George PAY in 1874.

The PAY family were Byrne settlers to Natal. George and Elizabeth Ann Pay, with their children Charles George and Edward R E (the latter born during the voyage), arrived at Port Natal on the Edward on 24 March 1850. This ship of 680 tons carried 250 emigrants among whom were some now well-known names: ACUTT, PIGG, FEILDEN, DACOMB, TYZACK, BASELEY. 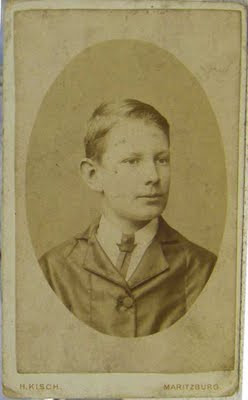 Ernest Bell Pay, pictured above in a carte de visite by H Kisch, had a son Victor Edwin Pay who married Violet Dorothy Moffatt. Victor and Violet had two daughters, Stella and Sheila.
Posted by Mole at 9:23 AM