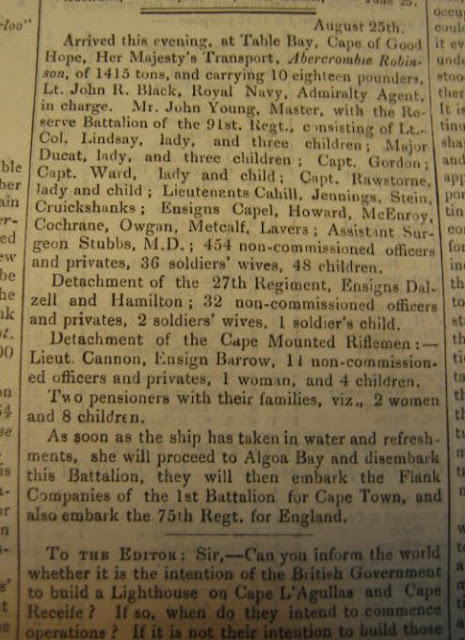 This report of a ship arrival at Table Bay is a good example of the usefulness - as well as the limitations - of this type of source for family history research.

The ship in question is the Abercrombie Robinson, a troop transport, and the year is 1842.

Leaving aside for the moment the dramatic events surrounding this vessel's arrival, the report emphasises the lack of detailed information given by the press about the rank and file of the military on board ships.

True to form, officers are named but NCO's and privates are not. Neither are soldiers' wives and children. Note the difference in terminology between the ladies of the officers and the soldiers' wives of the lower ranks. Class distinction was alive and well on vessels in the mid-19th c.

'454 non-commissioned officers' of the 91st Regiment's Reserve Battalion could hide numerous potential forebears from our view. Ditto the 11 NCOs and privates of the Cape Mounted Rifleman, travelling with '1 woman and 4 children' (no ladies here). 'Two pensioners' remain obscure - as do their families.

A detachment of the 27th Regiment offers 32 unnamed NCOs, with a couple of wives and '1 soldier's child'.
On a personal note, I found it curious that the two Ensigns leading this detachment were DALZELL and HAMILTON - surnames inter-linked in my own family history and an incentive to follow-up the reference.

The report underlines that wives (of all classes) did 'follow the drum', and at no little risk to themselves. Also, it gives an indication of the continual movement of British troops in and out of the Colony, back and forth between Britain and South Africa. The Abercrombie Robinson was intending to make for Algoa Bay to disembark her military passengers and embark members of other units before heading 'home'.

This was not to be: the vessel was wrecked in Table Bay during a north-west gale on 28th August 1842 - two days after the above report appeared in the South African Commercial Advertiser.
More in a future post.

Note also the brief letter below the report, concerning a lighthouse to be built on Cape Agulhas and Cape Receife. A topic to come back to later.
Posted by Mole at 10:29 AM

Newspaper can provide so much more than just names and dates. See Newspapers and Genealogy at Hidden Genealogy Nuggets .