Disembarking relatively small groups of passengers at Natal's port was difficult enough. Landing entire regiments as well as horses, arms, ammunition and other supplies in time of war was a nightmare. During the years and months immediately preceding the Zulu War of 1879, the Bar across the harbour entrance was an obstacle to larger ships. Every soldier, every horse and all the accoutrements of a great military force had to come ashore in small vessels (lighters or tenders of various descriptions). While waiting in the outer anchorage, ships were always in danger from changes in wind and weather, with the real possibility of a vessel being dashed on to the rocks below the Bluff - as had happened two decades earlier in the case of the former East Indiaman, Minerva, in 1850, and other subsequent wrecks.

At the port there were no wharves as we understand the term today. Lighters carrying troops and equipment would be beached on the shore. Sometimes floating gangplanks would be used. Horses and other animals were winched up in a body-sling and transferred from the large vessel to the lighter: that can't have been as easy as it sounds, particularly not for animals which had already endured months of shipboard conditions.
Referring to the Anglo-Boer War of 1899-1902, The Times History of the War mentions that 13 000 horses died at sea and many times that number perished because they were put into the field before they had time to recover from the effects of the sea voyage. About 2 000 mules died at sea on the way to South Africa. (The Remount Department, in Britain and South Africa, during the Anglo-Boer War supplied 520 000 horses and 150 000 mules: cost, 15 million pounds.)

Early in 1880, with the conclusion of the Zulu War and the battles of Isandhlwana, Rorke's Drift, Ulundi and others passing into history, the task of re-embarkation would begin. No sooner had that been achieved, than the outbreak of the First Boer War (or Transvaal War of Independence) required the landing of further troops and the usual stores and equipment. Durban had become an extremely busy port.

From 1899, if your British ancestor served in the Anglo-Boer War, he may well have been loaded into the notorious basket contraption and lowered over the side of a ship into a waiting lighter. 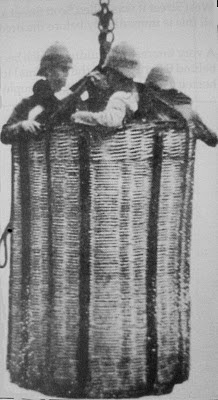 Footnote: a comment from someone in Michigan that this 'strange device' reminds him of cages used by fishermen to catch lobsters in Alaska. I'll bet they don't catch many wearing pith helmets, as seen above.
Posted by Mole at 10:30 AM