1817 Benjamin Moodie’s private scheme: 200 Artisans from Scotland to the Cape

1823 John Ingram’s scheme: contract labourers from Ireland to the Cape in the Barossa

1830s and 1840s Small parties brought by agents such as JS Christopher from Britain to the Cape.

1844 Government sponsored immigration: children and single Irish women from Britain to the Cape

1848 Jonas Bergtheil’s private scheme to bring German settlers to Natal: known as the Bergtheil Settlers or the Cotton Germans

1849 Emigration Philanthropic Society of England sponsored 20 women from British workhouses to the Cape.

1849-51 Immigrants from the Duke of Buccleuch’s estate in Hampshire travelled to Natal on Byrne’s ship the Lady Bruce; another piggy-back scheme.

1882 Norwegian immigrants to Natal: now known as the Marburg settlers

Note: use the search facility on this blog to find further detail and useful links relating to the above phases of immigration to South Africa in the 19th c. 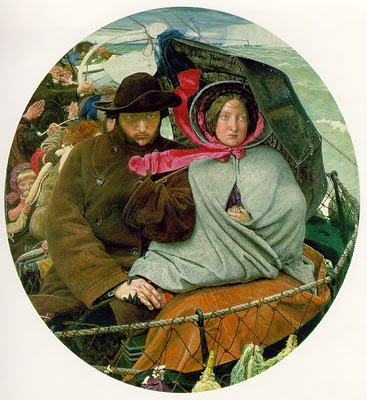 The Last of England
by Ford Madox Brown
Ford Madox Brown's famous painting The Last of England encapsulates in a romantic, personal and unparalleled way, the story of emigration from Britain. The artist shows the moment of departure, with the white cliffs of Dover receding ever further in the background, and in the foreground a young couple huddled close together in the prow of the boat taking them away from everything they knew as home, towards the sailing ship which will transport them across the ocean into an uncertain future in a strange land. Beneath the woman's cloak, a small child is almost hidden from view and the parents' faces show their sadness and courage while they resolutely face their destiny, never looking back.  It's said that Brown intended to depict two friends who were leaving for Australia, but his picture transcends such details and gives us the archetypal 19th century British emigrant family.
Posted by Mole at 10:10 AM