Sail and steam co-existed at Durban for many years. From the early 1880s progress gradually began to be made in deepening the harbour channel by dredging. This and other schemes for improvement, including the controversial breakwaters designed by several harbour engineers, continued through the following decade, though the bay remained inaccessible to vessels of a deep draft.

By 1904 as a result of continued dredging operations 33 million tons of sand had been shifted.

On 26 June 1904 the Armadale Castle was the first mail ship to cross the Bar and enter the harbour. She was the flagship of the Union Castle Line (Union Line and Castle Line having amalgamated in 1900) weighing in at nearly 13 000 tons and with a draft of 7,6 metres.

This historic crossing marked the end of the basket-landing era. Passengers would be able to disembark by gangplank directly from ship to shore. The arrival and departure of the mailships became glamorous and exciting events drawing crowds of sightseers: bands played, and coloured streamers were thrown by travellers on deck or by their friends who had come to ‘see them off’.

For family historians, the best way of tracking an ancestor who departed by ship from British ports between 1890 and the 1960s is via the passenger search facility provided by ancestorsonboard, powered by www.findmypast.com/  This information stems from original Board of Trade passenger records; regrettably records prior to 1890 were destroyed.

The Windsor Castle would be the last mailship to make the regular call at Durban, in July 1977. When she departed, so did much of the romantic aspect of the port. 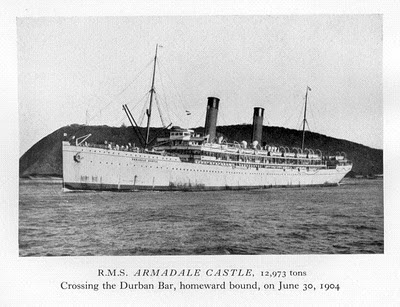 Note the original lighthouse close to the end of the Bluff: opened with much ceremony on 23 January 1867, its beacon went out for the last time on 15 October 1940 and the structure was demolished by the military in June 1941.
The Point, Durban, from the Bluff during the 1890s: note the mixture of sail and steam.
Posted by Mole at 8:47 AM