Before you start you need to know the ancestor’s name. That may seem blindingly obvious but it’s surprising how many enquiries begin: ‘I’m not sure of his name … but he fought in the Boer War’ (or other conflict).

Preferably you also need to know his regiment. Rank and date of discharge would be helpful.

British Army records for any soldier discharged before 1913 may offer the following information: age, place of birth, age on enlistment, length and location of service, character report and details of appearance, trade or occupation and reason for discharge.

To find this information you’ll need recourse to Service Records held at The National Archives, UK, either visiting TNA yourself or delegating to an experienced military researcher (often the wisest, speediest course). Search TNA’s online catalogue for a start.


If your military ancestor was an Officer in the British Army, his career could be traced using the Army Lists. Service records of officers are mainly in WO 76.

The Imperial Yeomanry was a force raised in 1899 for service in the Anglo-Boer War. This decision was taken after the battle of Colenso, 15 December 1899, when it became clear that reinforcements were required in South Africa. Among early recruits were thousands who had no previous military experience and received minimal training. The IY was a corps of mounted men, who had to be good riders and marksmen, between the ages of 20 and 35.

These shouldn’t be confused with the City of London Imperial Volunteers which was a separate regiment.

All except three of the Regular regiments and corps of the British Army of 1899 served in the Anglo-Boer War. There have been confusing changes since that date, many of the regiments having been amalgamated or disbanded, or given new titles.

Regimental museums may be a good source of information. An essential reference work for such addresses is the Family and Local History Handbook published annually in UK. http://www.genealogical.co.uk/ 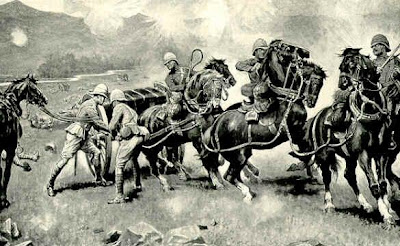 Retrieving the guns: Ladysmith
Posted by Mole at 4:03 PM