Settler Ancestors from Europe to Natal in the 1880s

While the majority of settlers to Natal continued to be of British origin, other countries also explored the prospect of Natal as a destination for emigrants. In 1880 the Natal Government was petitioned on the topic of Danish emigration. A couple of years earlier, Otto Witt and a business partner, Fristedt, intended introducing immigrants from Sweden into Natal, and requested land on which to locate them.

However, the next major group of immigrants from Europe were Norwegians and they arrived in 1882, founding a settlement at Marburg on the south coast of Natal between the Umzimkulu and Izotsha Rivers. UPDATE: see further posts on this topic in 2014

For passenger lists of Germans travelling from Hamburg from 1858 to 1883 see Joachim Schubert's exceptionally useful site at www.safrika.org/schiff_en.html  These passengers disembarked at various South African ports.

By 1880, Walter Peace had taken over as Natal Immigration Agent based in London. The Natal Mercury, 19 May 1880 reported the arrival of the URMS African from England after a very good voyage.


She had on board 60 immigrants - 20 men and 10 women and children. The men are carpenters, blacksmiths, farm labourers, engineers, gardeners and joiners, and the women, housekeepers and domestic servants.  We have little doubt that we have to thank Mr Walter Peace ... for such a large and respectable class of immigrants as landed at the Point yesterday. Mr Peace has this year been instrumental in sending out a total  of 200 immigrants. Early yesterday Mr Reid of the Immigration Depot went out in the Union [tug] and boarded the African for the purpose of looking after those who were arriving here under the Immigration Act and in a short time the Union landed them safely on to the wharf. Some friends of the immigrants were present, but there were some more who found themselves on a foreign land without those who required their services being there to receive them.  For such parties Mr Reid had made preparations by having tents erected on the Market Square for their reception, and it speaks well for the friendship formed by this large body when we mention that in no instance was a poor stranger allowed to enter the tents; those who had found friends kindly looked after their less fortunate fellow passengers, and in a short time they were all distributed throughout the town in boarding-houses. They spoke highly of the treatment they received while coming out. An infant, aged a little over a year, died on the 18th of April. The names of the passengers will be found in our shipping column. 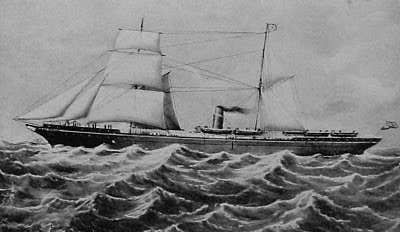