Immigrants to Natal in the 1870s

This photograph shows Field Street, Durban, during the 1870s: the road is unsurfaced and could become a quagmire in the rainy season. Structures vary in size and style. It's still the era of the horse and the horse- or ox-drawn wagon. Dalton's Saddlery, in business from at least a decade earlier, (sign shown in white on the side of the first building at left), would have been kept busy. In fact, George Dalton did so well that in 1872 he opened a branch 'at the Umgeni, adjoining Allen's Ferry Hotel'.

Everything looks peaceful enough, yet the 1870s would prove to be a turbulent decade in Natal's history. The inhabitants were continually fearful of an uprising of local tribes. 1873 brought the much-mishandled Langalibalele incident: in brief, the chief of the AmaHlubi resisted orders from the magistrate to register guns held by the tribesmen and failed to report personally in Pietermaritzburg. This was regarded as rebellion and British troops assisted by Natal volunteers were sent on a punitive expedition to Hlubi territory. Langalibalele (loosely translated, Blazing Sun) escaped but was eventually arrested. In a skirmish at Bushman's River Pass, Major A W Durnford's force lost three Natal Carbineers (one of the them the son of the Colonial Secretary, Erskine) and Durnford received a wound to his arm which made it unusable for the rest of his life (only about six years, as he died on the field of Isandhlwana in 1879). Langalibalele and his sons suffered banishment and imprisonment.

Meanwhile, various political factors, including a boundary dispute with the Transvaal, were causing additional pressure on the Colony of Natal, and would culminate in the outbreak of war in 1879 - now referred to as the Anglo-Zulu War.

Yet Natal continued to be advertised in the press and elsewhere as a suitable prospect for immigrants from overseas. Certain occupations could guarantee a free passage.  The Natal Almanac of 1877, under the heading 'Immigration from Europe' states:


Assisted and free passages are granted only to persons nominated under applications and contracts by residents previously approved by the Protector of Immigrants in the Colony. Assisted passages from Great Britain are in the first instance paid in full by the Natal Government upon the written undertaking of the applicants in the Colony, ratified by their nominees, who ... become responsible for the part payment of the passage money at the rate of 10 pounds sterling for every statute adult, in two equal instalments ... Free passages are granted from the United Kingdom for immigrants of the following classes: Domestic Servants, Farm Labourers, Mechanics viz Engineers, Engine-drivers, Carpenters, Bricklayers, Stonemasons, Blacksmiths, Wheelwrights, Shipbuilders ... 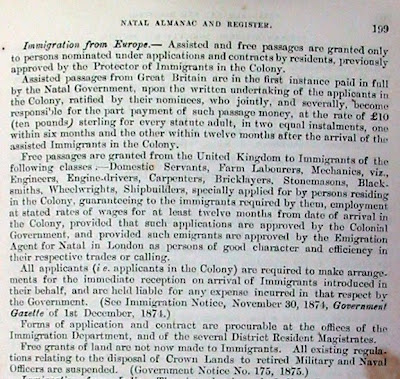