Today marks the 141st anniversary of the death of Captain William Bell, Port Captain of Durban, on 10 April, 1869.

Bell was born in the parish of Bowness-on-Solway, Cumberland in 1807 and not, as stated in a number of published works, in Dumfries, Scotland. At the time of his birth his parents, Thomas and Elizabeth Bell, were living in the village of Glasson, one of the tiny hamlets scattered along the edge of the Solway Firth. Their son was baptised in the church of St Michael’s, Bowness; in the churchyard is a large memorial stone to members of the Bell family who lived in this area for generations.

By the 1830s, Bell was at the Cape, commanding the 100 ton schooner Conch, a regular trader along the south-eastern coast of South Africa. He married at Port Elizabeth in June 1838 Mary Anne Caithness. At least thirteen children were born to this couple, twelve surviving to adulthood.

In 1842 the Conch and her commander played a role in the conflict at Port Natal, landing troop reinforcements to raise the siege of the British garrison. This moment was immortalized in a painting by the artist Thomas Baines (seen top right on this page).

Bell was Port Captain at Natal during the 1850s, and was present for the arrival of settler ships of that era, including the ill-fated Minerva which was wrecked at the foot of the Bluff. His signature appears on original passenger lists of the 1850s and 1860s. As a member of the Harbour Board, Bell was closely involved in the on-going development of Durban harbour and the efforts to surmount the difficulties posed by the Bar at the entrance to the Bay, particularly during the time of the pioneering Harbour Engineer, Milne. 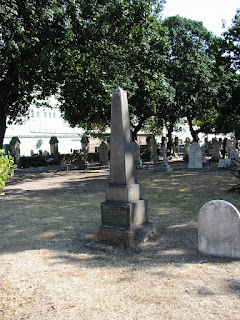 During his twenty years in office, Bell was part of all enquiries made into shipwrecks in or near the Port, voicing his opinions with his usual unflinching clarity. He also undertook expeditions along the north-eastern coast, to find and chart other navigable harbours.
An obelisk in his memory stands in West Street Cemetery, Durban.
Posted by Mole at 8:47 AM