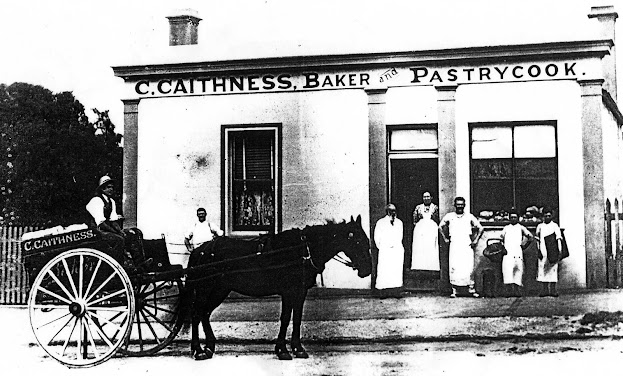 Charles Caithness was a ship's baker who settled in Australia and started up his own bakery and pastrycook business. Charles was a brother of Mary Ann Caithness who married Captain William Bell, Port Captain of Natal.
The Queenscliff bakers shop photo above is probably 1904 to 1906, just before Charles's death in 1906. Charles and his 2nd wife in door, their two sons at right, others are employees.
Somewhat luckier than his eldest brother, James jnr, Charles only experienced one shipwreck, the Rangoon in 1871. The Himalaya, March 1865, brought his family out to Sydney. Chas appears to have been on the Pt. de Galle, Ceylon to Sydney run from 1862 to 1871, (*info from Don Gaff).
There is no information on whether he ever went back to UK to visit/organise the family to emigrate. An infant son died in 1865. The shipping information for the Himalaya only lists Mary and the three girls. In theory there would not have been enough time between March and November 1865 to make a new baby, but the infant may have been premature, hence did not survive.