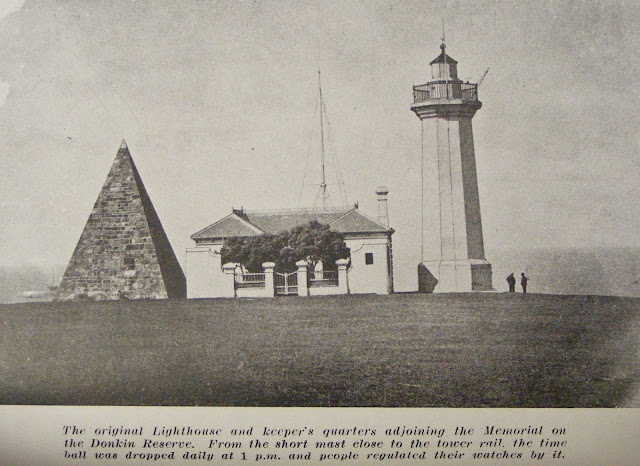 In the mid-1850s when the admiralty surveyor, Lt Joseph Dayman, pointed out that a lighthouse near the Donkin memorial would be invaluable to shipping at night. The project, however, did not get off the ground until early 1857 when the matter was discussed by the Harbour Master, H G Simpson, and assistant government engineer, Matthew Woodifield A.C.E. of the Colonial Civil Engineer’s Department.
It was decided that a fixed light illuminating 90 degrees seaward, 70 degrees white and 10 degrees each side red, visible for 8 miles in clear weather, should be provided.
Inevitable delays resulted from waiting for the British government to decide whether it or the Cape government was responsible for the cost of construction and maintenance. Once this was resolved, the decision had to be taken as to where to put it: on the port office or the Donkin. The Harbour Master estimated the respective costs to be £150 and £350. He felt that the light was to be specifically an aid to ships wanting to anchor at night, rather than it being a general extension of the existing aids to coastal navigation. The port office scheme was eventually scrapped when it was found that the existing building was not capable of supporting the extra weight.
Subsequently the Port Elizabeth municipal commissioners delayed matters by raising the question of the right to build on the Donkin reserve, which had been declared a public place in 1821, but the Harbour Master’s favoured location was the Port Office. Eventually they gave approval in November and the Harbour Board undertook to build the lighthouse on behalf of the government for £350. The lantern had cost £217 13s 3d in 1858.
Another nine months were to pass before the approval was given for construction to commence. Because the government engineer’s plan included accommodation “not contemplated in the original plan“, and would therefore exceed the original estimate, the lieutenant governor had ordered that the project wait until parliament reconsidered the matter.
Finally, in May 1860 the harbour board engineer, Alfred Warren, was given instructions to start the 17-metre lighthouse “forthwith”. It was completed a year later and came into operation on 1st June 1861, eleven years after Commandant Captain Francis Evatt had passed away. As a result, new sailing directions for Algoa Bay were issued. It was stated by captains of vessels at sea to be clear, powerful and visible for a distance seaward of some twelve miles. The light was a fixed occulting one as distinct from the revolving type which throws a beam seaward, as do most lighthouses along our coast. The official description read, “It is of the 6th order, the light being transmitted by a circular lens with prisms above and below. Height of lighthouse 55 ft. from base to vane, plastered cement, natural colour.”
The harbour board submitted its account of £942 18s 5d to the government which was £120 13s 1d more than the estimate. “The extra expense has arisen chiefly from the difficulty of procuring the stone for the plinth and the expensive process of dressing it.” The plinth was eventually provided by local building contractor, Charles Inggs, for £66 16s 1d.
Mr Hammond, one of the port boat crew, was appointed the first lighthouse keeper and he appears to have been well satisfied with his new and responsible post. In 1862, he applied for quarters to be built adjacent to the lighthouse. Charles Hammond for whose family the adjoining cottage was built in 1865 kept meticulous meteorological records and served until his death in January 1881. 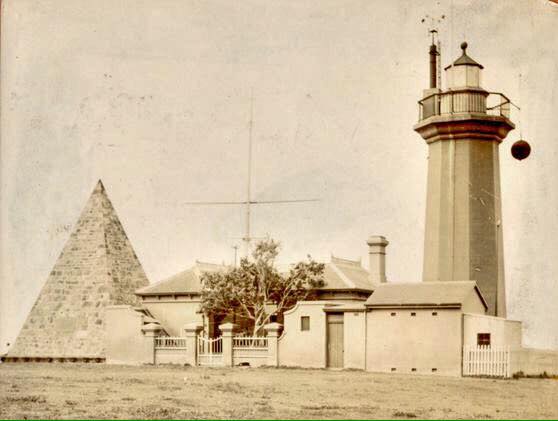 During 1862, the harbour board made inquiries into the possibility of placing a time signal on the Donkin lighthouse. It was to be activated from Cape Town by telegraph, then still under construction. The initial cost was estimated to be less than £300, with a further £150 a year for maintenance. In March 1863, steps were taken to ascertain the cost of the time ball itself. Early in 1864, the harbour board again appealed to government to finance a time signal on the Donkin lighthouse.
The ball itself was made of wicker-work covered with black painted canvas. It was 1.2 metres in diameter and fixed to a 4.3-metre iron bar, which swivelled on a framework attached to the lighthouse gallery. When not in use, the ball hung downwards with the shorter arm of the bar uppermost. Just before 1 o’clock Cape mean time each day – except Sundays and public holidays – it was hauled uppermost ready to be dropped when the trigger was electrically activated from Cape Town. It was noted, however, that the “correct mean time is 1 hour 28 minutes 34.6 seconds”. They even made a contingency plan in the event that the ball was prevented from dropping at the proper time, then a red and blue chequered flag would be flown from the upper window of the Lighthouse and the ball dropped by chronometer at 1hr 05m 00sec, Cape mean time, or 1hr 33m 34.6sec, Port Elizabeth mean time.
[A similar arrangement was in use at Durban and Thomas Alfred Gadsden, my great grandfather, was Timekeeper after he left the position of Lighthouse Keeper at the Bluff.]

Thanks for these Lighthouse series of Blogs Rosemary, I'm really enjoying them!
Regards, Shane.

Thanks so much for your positive feedback, Shane. Best Wishes, Mole

More lighthouses for you, Shane! See today's post (9 Sept) re Cape Columbine.
All the best, Mole.

Thanks Mole, only just seen your reply!