Dassen Island Lighthouse is on the southern point of Dassen Island, west of Yzerfontein. It is a white circular cast-iron tower that has been in use since 1893.
The lighthouse is found on southern point of Dassen Island, off the western coast of South Africa, 55 km north-west of Cape Town and 11 km west of Ysterfontein. It was installed on 15 April 1893. The lighthouse consists of a circular cast-iron tower that is painted with white and red bands and stands atop a brick base to height of 28 m. 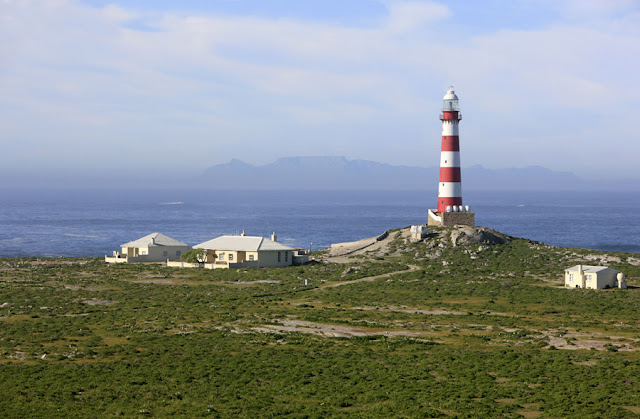 The light house signals two white flashes, separated by 10 s, every 30 s. The fog horn blasts for five seconds every fifteen seconds. The lighthouse is manned at all times.

Dassen Island is the most isolated manned lighthouse on the South African seaboard. Set on a  barren outcrop of rock and sand some 55 km from Cape Town, and 11 km from the coast, the 28 metre high, circular lighthouse with its distinctive white and red bands is manned by a solitary senior lightkeeper.

It remains one of the major beacons on the Cape shipping route. In fact the island derives its name from the prevalence of shipwrecks in the area. It was so notorious that rabbits (dassies) and tortoises were released onto the island to serve as a source of food for any survivors.

The tower's outer walls are painted in eight alternative horizontal bands of red and white, whilst its lantern is twelve feet in diameter, the light of which was initially commissioned in April 1893. Today the range of the light is 24 sea miles so that on a clear evening one can see it from the top of Signal Hill in Cape Town.