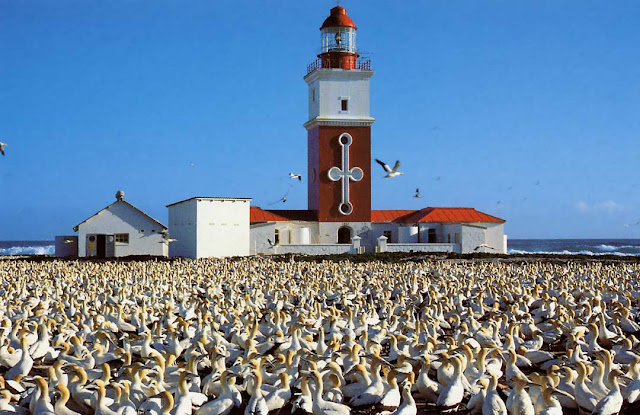 Algoa Bay is a bay in the Eastern Cape, South Africa. It is located in the east coast, 425 miles (683 kilometres) east of the Cape of Good Hope.
Algoa Bay is bounded in the west by Cape Recife and in the east by Cape Padrone. The bay is up to 436 m (1,430 ft) deep. The harbour city of Port Elizabeth is situated adjacent to the bay, as is the new Coega deep water port facility.
Vasco da Gama named this group of islands Ilhéus Châos (low or flat islands). In 1755, the East Indiaman Doddington was wrecked here while underway from Dover to India. Most of the passengers and crew perished, but a few managed to make it to the islands where they were marooned for seven months until one of their number, a carpenter, was able to make a boat for them. The survivors subsisted primarily on fish, birds and eggs until they were able to reach land. The ship was carrying a significant quantity of gold and silver, some of which was illegally salvaged in more recent times.[6] Bird Island was named by the survivors as they left the island in their boat.

Bird Island (33°50′26″S 26°17′10″E), Seal Island and Stag Island lie in close proximity some 40 km (25 mi) east of the St Croix group or 53 km (33 mi) due east of Port Elizabeth and 7 km (4.3 mi) from the nearest landfall at Woody Cape – part of the Addo Elephant National Park. Bird Island has a lighthouse, erected in 1898 after a series of shipwrecks in the vicinity of the island. Doddington Rock, West rock and East Reef lie just South-West of the group of islands.

At 19 hectares (47 acres), Bird Island is the largest of the Algoa Bay islands – according to BirdLife. It is relatively flat and rises to 9 m (30 ft). Seal Island is 0.6 hectares (1.5 acres) in size and lies 360 m (1,180 ft) north of Bird Island. Stag Island is even smaller at 0.1 hectares (0.25 acres) and is 320 m (1,050 ft) north-west of Bird Island. "Much of the island group is covered by sparse growth of mixed vegetation dominated by the fleshy herb Mesembryanthemum (fig marigold/icicle plants). Tetragonia (Duneweed) and Chenopodium (Goosefoot) form localised thickets that provide cover for some seabirds,"
[Wikipedia] When lighthouse keeper Hannes Harker is posted to a remote island with his young wife, he discovers something long-hidden in the tower that causes him to lose his footing and fall. Seriously injured, Hannes is evacuated to hospital and nursed back to health by Sister Rika, to whom he haltingly tells the story of his life: of his mother’s mysterious death, of his wild young wife, Aletta, and of the desolate island inhabited only by the lighthouse keepers and guano workers – two communities confined together, yet rigidly separated in one of the bleakest places on earth. With the arrival of a figure from Aletta’s past, her own secrets erupt into the present, just as the simmering tensions and injustices endured for so long by the guano workers erupt into a single, shocking act of violence.