My name on my tombstone 7 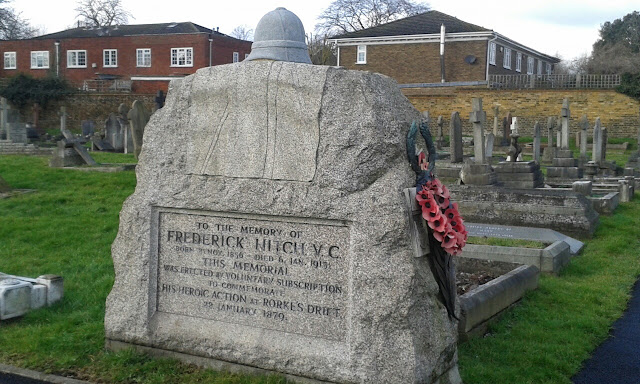 Inscription reads: To the Memory of Frederick Hitch V.C. ... this Memorial was erected by voluntary subscription to commemorate His Heroic Action at Rorke's Drift 22 January 1879

Famous occupants of Chiswick Old Cemetery include  the painter Hogarth (famous for satirical prints including A Rake’s Progress, and Beer Street and Gin Lane – his house in Chiswick is now a museum); John McNeill Whistler (whose 1874 Arrangement in Grey and Black no.1 is better known to us as ‘Whistler’s Mother’); and Frederick Hitch of Zulu War fame, who was one of 11 men to be awarded the Victoria Cross after the Battle of Rorke’s Drift, where some 150 British and colonial soldiers defended an isolated mission station against 3,000-4,000 Zulu warriors. His gravemarker, a boulder draped with carved union flag and topped with a stone helmet, is a particular highlight.

Pte Frederick Hitch VC. Born 29th Nov 1856 Southgate, Middlesex, died 6th Jan 1913 of pneumonia and heart failure due to picket duty while on strike as a cabby after the Home Secretary (Winston Churchill) increased the price of petrol but did not allow fares to be increased at the time.