Souvenir Saturday: Natal gets steamed up in the 1860s

There had been a new development at the end of 1859: Natal’s port had acquired its first steam tug (perhaps the first steam tug in Africa), the Pioneer. This purchase had been recommended by engineer Milne as early as 1852 but colonial wheels turned slowly. It was planned that the tug would tow helpless sailing ships over the Bar and, fitted with a special iron rake, would also assist in scouring the channel since the ebb tide didn’t seem to do this efficiently. (The suction dredger was then unknown.) It took Pioneer just over 100 days to sail from England to Natal; her paddles were fitted when she reached her destination.In 1860, keeping up with changing times, Durban’s (and South Africa’s) first steam railway was built between the town centre and the Point. Principally it would carry cargo from the ships visiting the port, which had previously been accomplished by ox wagon. The town end of the 2 mile line was on the site of what would later, in the era of the Natal Government Railways, be Durban’s main railway station, next to Market Square (where Farewell Square and the City Hall now stand). 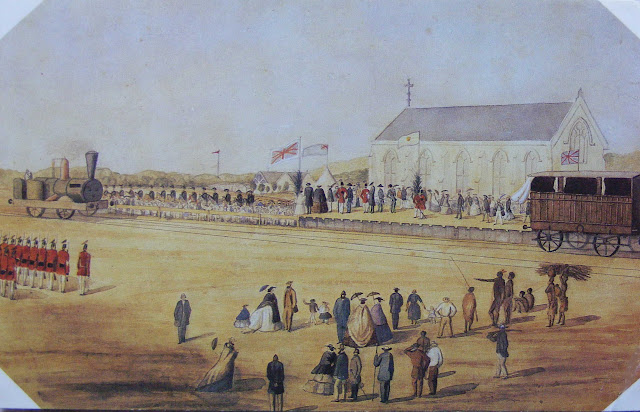 Local artist Robert Bristow Tatham* (d 1881) left us a snapshot in time – a watercolour sketch showing the opening ceremony of the Natal Railway Company’s Durban to Point Line, 26 June 1860. There is a wealth of detail in the painting. Was your ancestor present on this occasion?Behind the platform is St Paul’s Church. Bishop Colenso, His Excellency the Lieutenant Governor, Major Williamson, and members of the Natal Legislative Council were among the notables at the event. Women dressed in their best, wearing bonnets and shawls and carrying tiny parasols, are gathered in the foreground along with their menfolk and children enjoying the spectacle. African bystanders include a wagon driver with his whip, another carrying a rifle on his shoulder, and ladies carrying firewood on their heads. The Anglican Bishop blessed the new railway and the dignitaries boarded the 1st class carriage – the remainder made do with the goods truck – for a ride to the Point and back. There had been a trial run a few days earlier, to make sure there were no mishaps when the Governor was a passenger.The star of the show – the small 12 ton locomotive, named 'Natal', was painted bright green, and had a very large funnel.
*Robert Bristow Tatham emigrated to South Africa in 1850; after a spell serving with the Cape Mounted Rifles he was appointed manager of the Natal Railway Company in 1860.The original  painting is held at the Local History Museum, Old Court House, Durban.

Labels: Opening of Point to Durban Railway 1860, R B Tatham