Arrival and Departure of the

This screw-steamer, part of the General Screw Company Cape-Natal line, first appeared in March 1854, followed some 8 months later by a sister-ship, the Cape of Good Hope, which had been carrying troops from England to Malta. At the time of this report, April 1854, both the  and the Cape of Good Hope were employed on the coastal service between Table Bay and . The  was not long seen in South African waters as the General Screw Company withdrew from the  and disappeared altogether in 1857. The  was chartered to the French Government and finally wrecked on the Spanish coast in March 1855 on her way to the . There was another later ship named , a coaster of the Union Line, built in 1866. 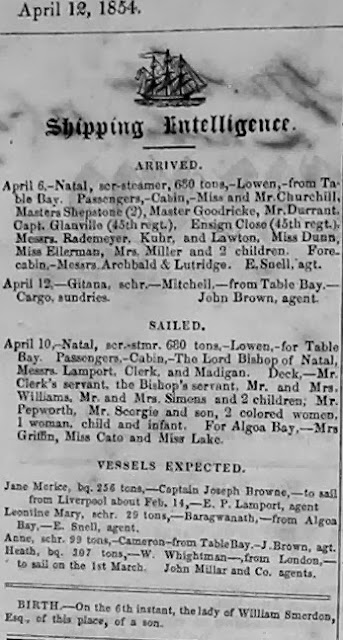 BIRTHS
On the 6th instant, the lady of William Smerdon, Esq., of this place, of a son.

This long expected namesake steamed round the Bluff shortly after 12 o'clock at noon, on Thursday, the 7th inst., and immediately crossed the Bar to the inner anchorage, although it was at the time low water of neap tides. This fact, accomplished without difficulty or danger by a vessel of 700 tons burden, is an appropriate practical commentary on the letters we have lately published, by the Resident Engineer of the Harbour Works, and a satisfactory illustration of the effects already produced by those Works, even in their present comparatively incipient state.

The  is a remarkably fine vessel, and besides having capacity for a large cargo - a great desideratum at present to our Colonial trade - she possesses ample and elegant accommodation for passengers. On this subject, and with reference to her general management, we elsewhere publish the testimonial of her recent passengers.

The  arrived at the Cape on the 20th March, and left with our Mails on the 27th, two days after the arrival of the Argo from . She encountered heavy south easterly gales after she left the , which occasioned her passage to be protracted to nine days.

The Peel which left this Port on the 22nd, had been fortunate in her run, having touched at Mossel Bay a day before the Natal arrived there; and as the wind, which was unfavourable for the Natal, was most propitious for the Peel [Sir Robert Peel steamer], it is highly probable that the latter would reach Table Bay in time to put the Mails on board the Lady Jocelyn, the homeward bound steamer which was to leave on the night of the 27th, the day on which the Natal left; but the south eastern blowing, would probably detain her, - and this is another circumstance favouring the probability of our mails being in time to be forwarded by her.

The Anne, Capt Cameron, had made a quick passage of nine days from this Port, having arrived on the 22nd ulto, and of course therefore in time for the English Mail. The Anne was reloading for Port Natal, and the Gitana was also chartered to bring cargo waiting for shipment. Both vessels may be expected daily.

The Natal met on the other side of Mossel Bay the Australian steamer, Australian, from Melbourne and Sydney, which had put into Algoa Bay for coals; and on the arrival of the Natal at the latter place, the disastrous news had arrived overland of the wreck of the Australian, which, through some at present unexplained mischance, had been run upon the rocks at Green Point at the entrance to Table Bay. The night was clear and fine; and the passengers and cargo, including a large quantity of gold, were all saved; but it was believed that this fine but singularly unfortunate vessel would be a total wreck.


Thanks for sharing great thought,I appreciate your work
must visit